Saudi Arabia Is Providing Oil To Pakistan On Deferred Payments And PM Khan Is Living Up To His Promises!

Saudi Arabia has been a strong ally of Pakistan since the Pakistan Tehreek e Insaf (PTI) government came into power. The exchange of visits and discussions over worsened political conditions internationally, state authorities of both sides have agreed upon beneficial terms. Mohammad Bin Salman Al Saud, Crown Prince of Saudi’s visit to Pakistan earlier this year resulted in ease of policies and low visa fee for Pakistanis working in Saudi Arabia. “Consider me the ambassador of Pakistan in Saudi Arabia”, this is what Saudi’s Crown Prince said before leaving Pakistan.

Saudi’s worth billions of oil supply to Pakistan!

Well, another good news for Pakistan from the Kingdom came in recently. According to reports, Saudi Arabia will begin supplying oil to Pakistan in July by the start of the new fiscal year and that too on deferred payments. The supply will be continued for three years which will be of 9.9 billion dollars in total which means Pakistan will be getting around 2.75 million dollars worth of oil from Saudi Arabia monthly. Woah! That’s a lot! This official statement was released by The Saudi Arabia Embassy in Islamabad.

This is official press release! 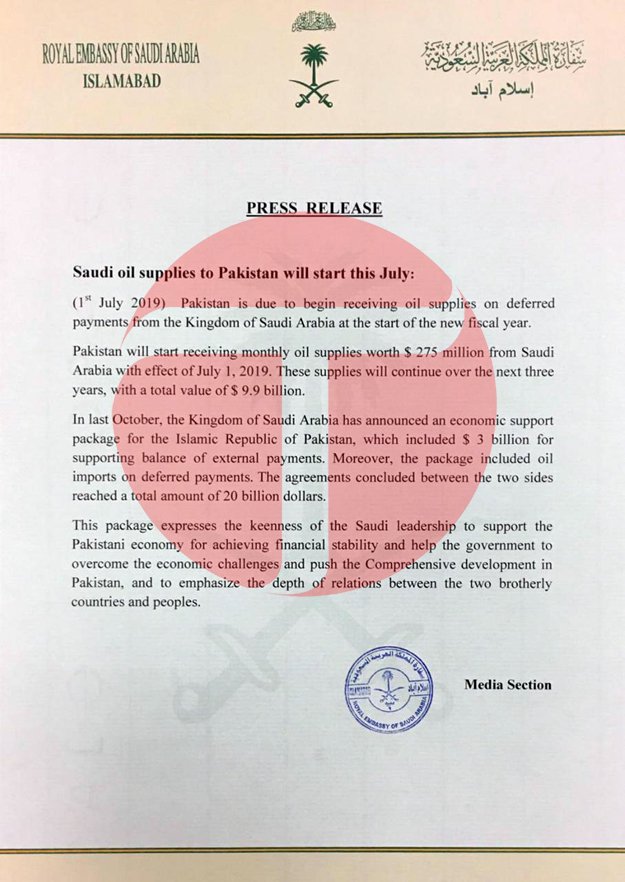 During Saudi Crown Prince’s official visit to Pakistan at the beginning of this year, premier of both countries signed a financing agreement for the import of crude oil and Liquifies Natural Gas (LNG). According to sources, the supply was to start from January 1 of the current year but due to some procedural and regulatory issues, it got postponed and the delay cost Pakistan of 3.2 billion dollars worth of oil facility.

The reason behind the delay!

The main issue faced after the agreement was for the testing of oil products being imported from Saudi Arabia under deferred payments, Riyadh didn’t want the Oil and Gas Regulatory Authority (OGRA) and the Hydrocarbon Development Institute of Pakistan (HDIP) to be involved in it. However, the countries finally agreed to each other’s terms and Pakistan will no be getting oil from July.

The basic reason for this package from Saudi’s premier is to help in stabling Pakistan’s economic conditions and that the country achieves financial stability in the future. Furthermore, provide help to the Pakistan government to face and eradicate negative elements that are creating hurdles in the stability of the economy in the country.

Found this piece informative? Let us know in the comments below!