Our great cricket team players have always found major challenges prompting in their careers. Where a team spot remains hard earned, match performances are integral and directly proportional to the length of your career, not to forget the pressure of fans and media mounting with every day that passes. Considering all, it’s not easy being a cricketer in Pakistan. Apart from the nail-biting competition, you are certainly surrounded by many other factors that could either break you or make you. But that seems pretty normal and justifiable, keeping in mind the level of prowess the game demands and only the best have to triumph. 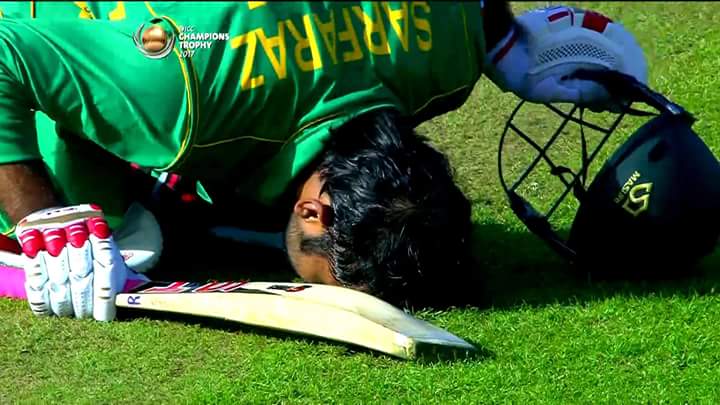 But then there is another challenge every cricketer has to face. The moment after you win or lose, a mic before you and foreign reporters ready to slice you up with their cutting questions and you realize your English language isn’t as good as your game. So, what do you do? Well, we have seen a heap of emphasis in the past on grooming our players, but sometimes there can be loopholes and it’s okay. Nowadays, you simply have to be yourself and it doesn’t matter whether you choose to speak in your native language or what. However, exceptional circumstances come abide and recently, our captain, none better than Sarfraz Ahmed can tell how it feels…

After clinching a nervous victory, Captain Sarfraz seemingly got more nervous as he saw all English reporters had surrounded him

This was probably the moment Sarfraz knew the storm has not delayed. He just dealt with almost a nightmare, a nemesis and the tides hadn’t turned! He still had to face yet another? His reaction was priceless, as he said, “Saaray English ke hein?” and “Kia hua? Saaray English ke hein… hein?” Watch the video below:

Sarfaraz Ahmed gets panic as he notices all the… by PakiViralOnline

My word… Look at his expressions. It’s absolutely hilarious how he mentions it and his expressions are priceless. This is not the first time we got an epic laugh over Sarfraz Ahmed’s press conference. It’s okay for him to fidget a little, or get nervous about it. He probably was thinking wish he had Imad Wasim by his side.

This video has also become a highlight of yesterday’s game. Talk about what a great match it was. Safe to say, it was the best game of the tournament so far. We saw such a composed captain who strategically steered towards victory and not to forget the important part Mohammad Amir played all along. So, congrats to Sarfraz and Team Pakistan over the victory. Let’s wish the Men in Green a great luck ahead of the clash against England!

This Astonishingly Simple Way Helps You Ensure No Pakistani Sleeps On An Empty Stomach Again
10 Things You Couldn’t Agree More to If You Went to St. Patrick’s All-Boys College
To Top