Pakistani’s are highly fond of cricket. In fact, if it were to categorize, cricket might be the most favorite and one of the national sports of Pakistan. Hence, each cricketer is given massive respect and a lot of love in Pakistan as well. In addition, even our favorite cricketers share the same spirit and love with their fans. When it comes to cricketer Sarfaraz much respect is still given to this hero of Pakistan.

Former captain Sarfaraz Ahmed is one of the most loved and highly respected cricketers more like hero of Pakistan. As a matter of fact, he is often winning hearts with his humble and good-natured behavior.

Just now as the cricket series between Pakistan and England are going on in Manchester, Ahmed’s humble nature made everyone feel warmth and admiration for him. 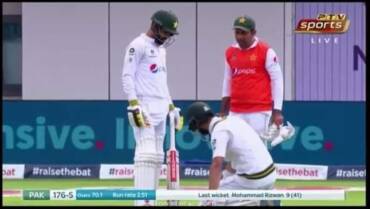 While everyone commends Pakistan’s performance in the Test series against England and celebrates Shaan Masood’s century, a controversy has erupted after a picture of Ahmed bringing water to the field went viral on social media.

During the break, it was seen, that Ahmed brought water bottles for his junior cricketers and also encouraged them. The entire aspect was quite admirable and won everyone’s hearts.

However, there are many people in Pakistan who still think that humbleness is a crime and Ahmed shouldn’t be bringing water for the cricketers.

Some are even lauding him for being generous and a great leader. It is indeed a great thing to make one’s team members feel accepted and treat them with friendliness. In fact, a good leader knows how to look after his or her team members by being a good friend rather than a tyrant.

It is to note that there is nothing wrong with bringing water bottles. Many players have done so. It is important to remember that before being a leader or a senior, one is a good human being.

As the picture of Ahmed providing water to all the players, Twitterati is having quite some mixed reviews about the situation. Perhaps, it is due to the protocol and or stigma set up by the society of leader or boss, which makes people think that a leader shouldn’t do so, however, the situation is both new for many.

#SarfarazAhmed
You are a lion
No matter you are in or out of team. Every Pakistani know those who had done for Pakistan they'll get their reward back. You were a great leader and you are a great leader. No doubt. IA see you soon in team. Best wishes. ❤#captain @SarfarazA_54

While some address to this as disrespect, others applaud it as good-naturedness and unity amongst the team. It ensures the bond between leader and teammates.

#SarfarazAhmed
Why we Pakistani react badly dont know why pic.twitter.com/7UI5Cix6tv

Apart from this, the former captain Sarfaraz Ahmed just made it to the list of providing water to companion players on the ground which resulted in people giving him more respect. From these players, profound and famous cricketers Don Bradman, Ricky Ponting, and Virat Kohli are also in this list.

No body is #senior or #junior in #professional world and there is no disrespect in doing your assigned work. Respect is not hurt by bringing water, we must not associate such things with being a junior. #ENGvPAK #SarfarazAhmed
Ricky Ponting, Kohli and Dhoni also did this. pic.twitter.com/YKgOL8jIhE

All in all, we are incredibly proud of our cricket star, Ahmed for his generous thinking and humble nature. It truly brings us joy to see that such kind and good-natured people like Sarfaraz exist in Pakistan, where power and authority are terms and everyone plays the sport with unity, much respect for this hero of Pakistani hearts.