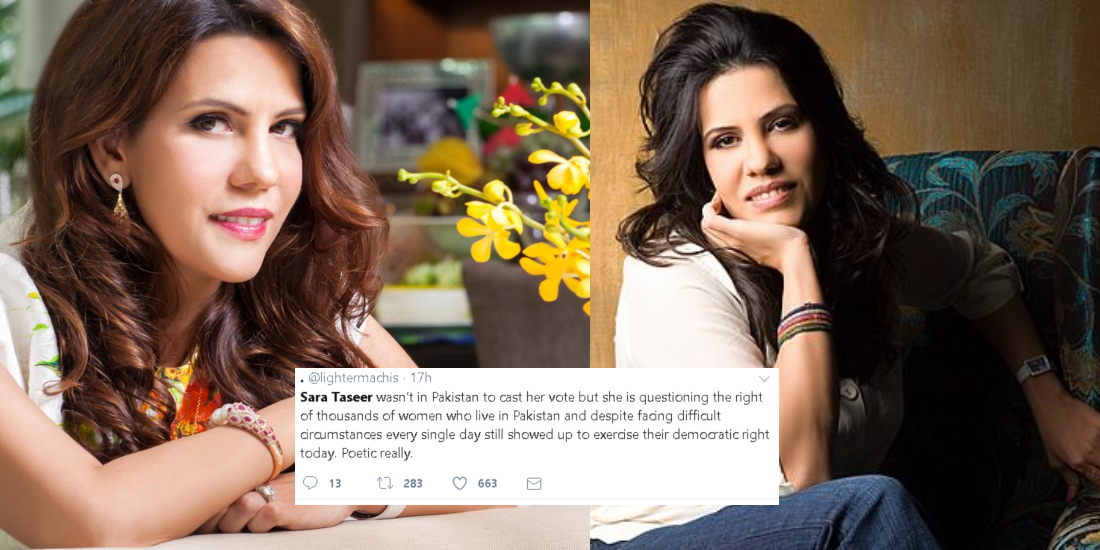 So, yes! We are done with elections and playing our part! Okay, partially maybe. But today, we might get to see the final results. It was VERY clear for everyone that PTI has won. ALMOST! PTI, which was taking care of KPK till now will now be taking care of the country. It was a quick change and pretty much unexpected since in the previous elections, people had same hopes for PTI to win but alas!

This time, it was a hard-hitting truth that PTI will win. Surprisingly, PPP too, along with PML-N, did not get much attention. Change is for good. But so much happened in just one day of elections; It felt like a whole year of activity happened in just ONE DAY!

Memes on Reham Khan, people mocking how to make Imran Khan win as they had to vote Amir Liaqat. People were encouraging each other to go out and vote. Many were seen posting their thumb pictures by using the hashtag #VoteKoIzzatDo.

Amidst all the good time, Sara Taseer chose to be outright obnoxious!

“Love seeing this turnout of women #PakistanElections2018, but then I think would I allow these ladies to make a decision even about what will be cooking in my kitchen today? And these ladies will decide on the future of the nation. Scary thought.”

Later, she deleted the tweet after receiving some verbal war from fellow “woke” Pakistanis Her super elitist mindset caught everyone by surprise!

Sara Taseer wasn’t in Pakistan to cast her vote but she is questioning the right of thousands of women who live in Pakistan and despite facing difficult circumstances every single day still showed up to exercise their democratic right today. Poetic really.

Well, treating women like a second-class citizen when done by a “woman” herself is something bothersome

It was bound to create such a roar!

And for one brief, spellbinding moment @sarataseer managed to unite the forever warring factions of the Pakistani twitterverse in mutual contempt for her.

Can’t say much about it

Sara Taseer decided to be the idiot of the day

Indeed! Elitism exists in every party!

This by Sara Taseer, daughter of Salman Taseer who was a champion of civil rights in #Pakistan & died for it, is an example of why an anti-elitist message is so powerful. Her defenses speak volumes. That she is a PTI supporter is a reminder that elitism exists in all parties. pic.twitter.com/PYrySKg83P

Dear Sara, i would have these hardworking women vote & choose a government for me rather than the condescending elitiya like you.

They are actually the true symbol of eliminating misogyny!

I am so proud of my women from the tribal areas who defeated bigotry & patriarchy & jumped on the bandwagon of initiating a change by casting vote. While Sara Taseer eats her designer jewerley in lunch away from Pakistan as she's too privileged to eat normal food.

The photo was of women, so it may have sounded like that. My tweet infact started with admiring the women who came out to vote. My concern is about uneducated people who are unable to make informed decisions deciding the future of the nation. Its a valid conern. https://t.co/eJ53uhDATk

How what are your thoughts on Sara’s stance?! Have your say in the comments below and let us and other people know. It is okay to mock people for their choice. The women of the tribal area like any other woman of Pakistan has the same right to choose the leader for themselves. Why mock them for their education? Let’s stop being classist!

Private Entertainment Channel’s Producer Made Insensitive Remarks About a Bomb Blast and It’s Disgusting
With Naya Pakistan around the corner, Reham Khan’s Twitter is Exploding
To Top