Quaid-e-Azam Muhammad Ali Jinnah, the name speaks for itself. The man who brought freedom to Pakistan from India, and contributed to India’s freedom from the British Raj, is renowned all over the world for his determination, class, character and will to succeed.

While most of the world which is adamant to history respects Quaid-e-Azam, our neighbors, however, are not fond of the charisma he held. Recently, a high-profiled issue has erupted in India, which has caused mass disturbance, as Indians once again, are being forced into submission by Hindu extremists. 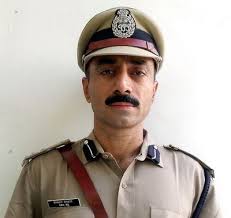 The RSS, Rashtra Swayamsewak Sangh, a band of avid Hindutva followers and extremists, wants Quaid-e-Azam Muhammad Ali Jinnah’s portrait removed from the Aligarh Muslim University. Muslims students and even Hindus, rallied against the RSS to not remove the portrait, but give it respect instead. This lead to clashes which injured many, including people from the varsity’s administration.

While many are supporting Hindu extremists and lauding them on the move, a senior Indian Police Service Officer named Sanjiv Bhatt does not agree with the extremist mindset. Instead, Sanjiv paid homage to Quaid-e-Azam, stating that he had great contribution in India’s freedom from the Britishers.

This is a picture of Gandhi’s statue at the Islamabad Museum.

Jinnah did far more for the Indian Freedom Movement than the entire RSS put to together. He was a freedom fighter both India and Pakistan should be proud of.

We need to overcome and outgrow our hatred and ignorance. pic.twitter.com/0SB7eoEhNa

In return he presented the example of the Islamabad Museum, where Mahatma Gandhi’s stature stands next to Quaid’s, and people from all over the country and come and pay their respect to both. The duo was the only reason our countries stand independent today. One without the other, would have not succeeded.

While IPS officer Sanjiv Bhatt talked about overcoming ignorance and hatred, people from both countries replied to his opinion and this is what they thought of the ordeal and his comments:

I hope you will visit Pakistan some day! We need ppl like u on both sides of the border ?

Pakistan seems to be more tolerant than India. And then they ask “Do u want to become like Pakistan?”

Jinnah did far more for the Indian Freedom Movement than the entire RSS put to together, this is why they hate him because they were happy licking the European Shoes…

This is amazing pic irrespective of the ongoing rush between the two nations.??

Your comparison is debatable, many might even agree with you. However respecting Jinnah in India for his contribution to freedom struggle might take decades and a much better relationship with Pakistan

Azfar And Mani Issue Public Apology After Woman Gets Offended With Their Opinion On Live Show!
Meesha Shafi Finally Reveals Why She Left Social Media and It is not What you Expected
To Top