Years ago, we witnessed how two lovers sharing the border of arch rivalry got tied in the knot of love. The news of their wedding announcement made waves all over the entertainment world and people couldn’t be happier. There was a lot of speculation though – “where would the couple live? How will they deal with political happenings? Who will bhaabi support when India goes against Pakistan in a cricket match?” and so on. However, years down the road, we see them still happy, sharing their immense love for each other.

Shoaib Malik and Our Very Own Bhaabi Sania Mirza! 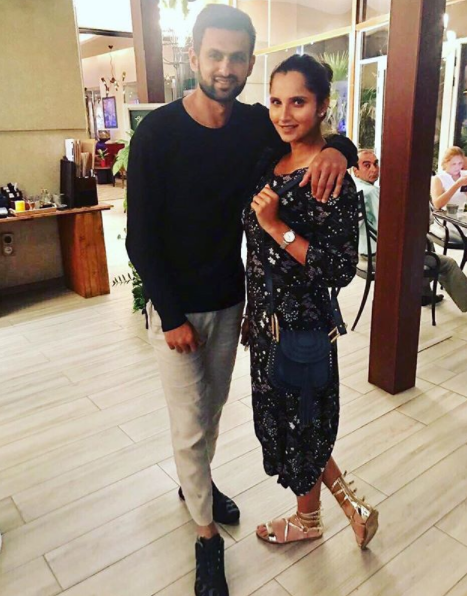 We often see the couple hanging out together in different parts of the world, going to one another’s sports matches and sharing pictures with each other. While their marriage has been on a roll from years, in an audio-talk show #NoFilterNeha, Sania revealed how possessive she gets regarding Shoaib Malik.

Upon asking what Husband Shoaib feels about Sania’s Wild Side, Here’s what the Tennis Star Said:

“We didn’t date that long. Usually, people date for years and then they get married. We dated for months and he got to know my wild side during this time. But he’s a very chuppa rustum. I got to know his wild side much later after we got married.” she said while sharing that the wild side she is talking about is completely outside the bedroom and the house. She further added that “He can party…that guy. But nobody knows that. Because he’s a chuppa rustum. I got to know his side after marriage and I was like PHEW – thank God!”

In a Love Advice she Would give to Shoaib Malik Here’s what the Wife Said:

“He needs to be a little more expressive with words…because he is not very because words are not his strength. I think he takes it for granted that I know that he loves me. Sometimes it’s nice to show it. We shouldn’t think ‘oh they know we love them so that’s good’. He should let me know that he loves me.”

(Probably a desi-guy problem because every woman wishes that hehe)

Well, Sania revealed a lot of joyful stuff about her relationship with Shoaib Malik and we are just happy to see how good they are together!

Listen to the full show on this link.

Twitter Decides to Increase Word Limit from 140 Characters and How People Reacted Will Make Your Day
Indians Have Declared a War on This Journalist after He Compared Map of India with Woman’s Lingerie!
To Top