West Indies star player Darren Sami is an important part of the Pakistan Super League (PSL) for the past few years. He is serving as the captain of Peshawar Zalmi since the inception of PSL. Zalmi owner Javed Afridi has now requested Pakistan’s President Arif Alvi to give honorary citizenship to Sammy.

Along with being an outstanding performer of PSL, Sammy is also one of the biggest supporters of Pakistan. There was a time when Pakistan was facing security issues and no international player was willing to come to Pakistan. Sammy was among those few players who accepted the invitation to play in the country. 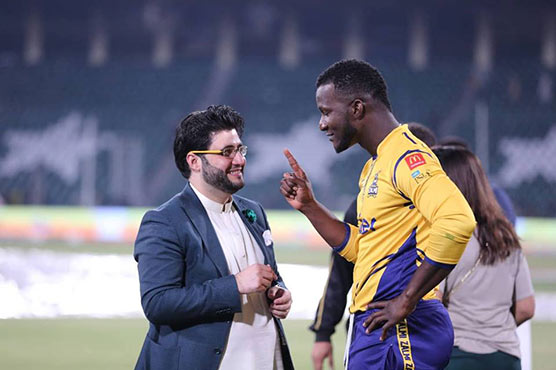 Zalmi owner was talking to the media at the trophy exhibition ceremony on Wednesday.

Afridi said that he is looking to attain honorary citizenship for his side’s skipper. Afridi, in a press conference, said that 36-year-old was instrumental for the return of international cricket in the country. He further added that in recognition of his services he should be awarded citizenship.

“We have requested for the honorary citizenship of Pakistan for Daren Sammy. The application is currently on the President’s table,” Afridi said.

Afridi is also hopeful that his request will be soon approved by the President. He also urged the PCB chairman to intervene in the issue and ‘make a phone call’ to the authorities.

Moreover, Afridi also talked about some voice notes from Sammy which are of very emotional importance for Pakistan. He said he will reveal those messages to the public at the right time.

“We request Chairman sb that they want honorary citizenship for Darren Sammy. An application in this regard is also lying pending before the table of the President. So, please make a call and it will be done. There are emotional things about Darren Sammy which I will tell you at some other time but those notes were too emotional for Pakistan,” Afridi said.

When PM Imran Khan announced last year that he wants 2020’s entire PSL season to be held on home soil, there were serious doubts about the practicality of his wish.

However, the cricket mega event is all set to return to Pakistan, especially in Karachi from today. The opening ceremony will be held today with almost 300 artists performing live in National Stadium, Karachi.  The opening match between Quetta Gladiator and Islamabad United will also be played today after the grand opening.