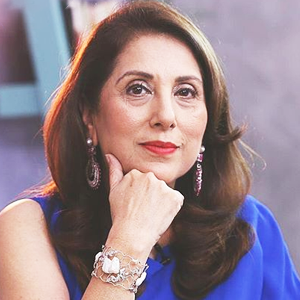 With a long list of successful dramas and top-rated serials, Samina Peerzada has been associated with this industry for a very long time since the 1980s. Starting from dramas then as a director she contributed and now you see her as a promising host with ‘Speak your heart’ and ‘Rewind with Samina Peerzada.’ She has a charm and graceful essence in her personality, which grabs you to the television screens. Even though she plays as an actress or host, both have something catchy to the eye; even though she didn’t come from an artist background, she still has that power.

Well-known Samina Peerzada was born as Samina Butt in a Kashmiri family having no connection with tv industry. Rise as a talented show business personality who worked in different areas as an actor (film and dramas), director, producer, host, and activist. Her parents Moinuddin butt and mother Almas butt brought her up in the most beautiful manner. She married a person within the industry well-known actor Usman Peerzada back in 1975. Together the couple has two daughters, Amal and Anum Peerzada.

Samina Peerzada got married to Usman Peerzada man from the same industry; they met in 1973 then, after some time decided to get married with mutual understanding in 1975. Together they manage to have a work-life balance and have two pretty daughters.

Her parents got separated which affected her life a lot but somehow, she manages things and accepts reality as it was. There are together for four years; they are a power couple then and now.

When she completed her Bachelor’s degree, she decided to join the showbiz industry with her acting skills and make her career in the industry without having any links. At the beginning of her career, she even struggled to get the minor roles. But her dedication towards acting and hard work made her prominent with some time, her work got noticed and the audience wanted her to be on screen. There is a long list of serials that made her noticeable, and people started admiring her more and more. She remained the part of numerous Punjabi and Urdu movies too.

Her drama serial ‘Dil Diya Dehleez’ which was released in 2006, was the major hit of all time. Later sometime in 2009, she again surprised the audience with her negative acting skills in the famous drama serial ‘Meri Zaat Zara e Benishan’ starring Faysal Qureshi, Summiya Mumtaz, and Adnan Siddiqui in the main lead. In 2010 another drama serial, ‘Dastan’ based on the partition, was added to her super hit list. In 2012 she grabbed everyone’s attention with her remarkable performance in the most popular drama serials ‘Dur e Shehwar,’ ‘Zindagi Gulzar Hai,’ and ‘Shehr e Zaat. Each drama has a different genre and requirement, and she played all with grace and beauty.

At the start of her career, she made her appearance in In 1980, her debut film released in the UK but unfortunately banned in Pakistan.

When she started her career, she showcases her acting skills in many Pakistani Urdu and Punjabi Films. In 1980 ‘The Blood of Hussain’ her debut film got released in the UK but, due to some reasons, banned in Pakistan by General Zia ul Haq.

After her many performances as a really promising actress, she is now ruling the screens with her show ‘Rewind with Samina’ where many celebrities have appeared as a guest. And share their life experiences with her and the audience, though after a lot of shows, she gets trolled by the people yet it is the most-watched show and much loved Pakistani host. Her communication and questions are so subtle that guests often get emotional while sharing their difficulties and hardships.

Along with national level appreciation, she also gained a lot of praise internationally;

Along with these, she is the recipient of many other awards and honors.

Samina Peerzada is a versatile Pakistani actress, host, and director; she has been part of the industry for a long time. She has done many positive roles and negative characters beautifully; her convincing performance earned massive audience appreciation.