Salman Ahmad Pays Tribute To Junaid Jamshaid Through This Video!

We have loved Junoon, even after it stopped existing years ago. We have always followed their members as they progressed further to produce their individual works someplace else. Always wanting to see attend their reunion where every member gathered and played one of their golden era songs; we all have dreamt of attending that event. However, now that Junaid Jamshaid is gone all those who have never seen them play together reluctantly have to let go of that dream. Salman Ahmad knows the feeling of losing a friend and so, he has paid tribute to Junaid Jamshaid in a very heart-touching manner that will definitely soften your heart!

On the silver anniversary of Junoon, Salman Ahmad has released his new single “Door”. It features Wasim Akram and his wife Shaneira Akram in the beautiful single produced by former Junoon member. Rabia Butt also appears in the video. The direction goes to Humza Yousuf, whereas the music was by Salman Ahmad who also happens to be a producer of the song along with Shahi Hasan.

Salman Ahmed dedicated this song to the singer turned religious preacher Junaid Jamshaid who left us all in a shock as his remains were discovered in the crashed PIA flight PK661.

It was only last year when the duo teamed up to release “Chaand Sitara”, to pay tribute to the victims of the Peshawar APS attack. The attack happened exactly a year ago in this day and nation would definitely be remembering the fallen children and all those who got affected in that cowardly attack inside a school. Although the religious figure had left singing years ago, he found it to be the best way to pay respect to the victims. 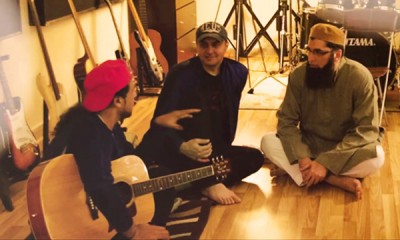 Now, when the whole nation feels his absence, Salman Ahmad has decided to engrave JJ’s name in his song so that he is always remembered.