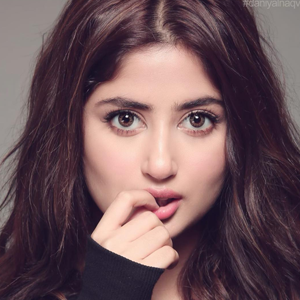 Sajal Aly is a famous Pakistani actress renowned for playing numerous characters in a range of dramas—from modern-day social to romantic dramas. Sajal Aly is indeed one of the cutest, talented, and energetic actresses you can have in the industry who is undoubtedly the biggest asset of Showbiz. Who knew that a fifteen-year-old girl who was initially seen in 2009 will become the superstar of Pakistan in the future. When it comes to acting, she is definitely a brilliant actress and when it comes to singing; she is indeed blessed with a soulful voice. She is a strong independent woman who is dynamic, companionable and brilliant who started her journey all alone without having any artistic background.

Sajal Aly’s first entrance on screen was a minor side role in one episode of the 2009 Geo TV’s parody-show Nadaaniyaan. She earned applause for her overwhelming role in the 2011 ARY Digital family drama Mehmoodabad Ki Malkain. Sajal Aly contributed to numerous famous telefilms such as ‘Behadd,’ ‘Well In Time,’ and ‘Yoon Hum Miley.’ In 2016, she debuted in the film industry with the movie ‘Zindagi Kitni Haseen Hay’ with co-actor Feroze Khan.

Sajal Aly acting in the high schooler drama Nanhi (2013), the comeback serial Chup Raho (2014), and the spiritual drama serial Khuda Dekh Raha Hai (2015) garnered her boundless acknowledgement as well as the Lux Style Award for Best Actress nominations. She has marked a Bollywood film named ‘Mom.’ The project film cast stars Sridevi in the lead role with Akshay Khanna in a comeback role. Sajal Aly and Adnan Siddiqui add spice to the movie.

Sajal has signed a Bollywood movie called ‘Mom.’ The woman-centric project stars Sridevi in the lead role with Akshay Khanna in a comeback part. The two Pakistani actors who grace the film include Sajal Aly and Adnan Siddiqui. And the unfortunate news that this film was the last film of Bollywood Actress Sridevi.

Sajal spent her early childhood in Lahore, then she with her family shifted to Karachi when her parents got separated. In addition to this, she has done her intermediate from Karachi. In addition to this, she has a sister Saboor Aly a well-known actress, and a brother. The young and beautiful actress believes in being confident and brave as most of the time her mother shared a phrase with her “Loh kya Kahengai?” but she always replies confidently, “Logon Ki Parwa Hai Humein?’. In her early life, she wanted to become a businesswoman but eventually, destiny led her to her acting career.

Sajal was born in an ordinary family where, unfortunately, her father left them to start his new life. She and her siblings were brought up by a single parent. Her mother, Firdous Ali, was a housewife who bravely took care of her children. Still, sadly, she died in 2017 due to the deadly disease ‘cancer.’ Sajal is the eldest sister while her other sister Saboor Aly is also a part of Showbiz and is likewise a talented Pakistani Model and Actress. Her brother Muhammad Ali is a student and lives abroad. She got married to Ahad Raza Mir on 14th March 2020.

Sajal’s Relation With Her Father

Sajal Aly has not such a good relationship with her father. In the beginning, she was disturbed because of her father’s second marriage; the way he left her mother when the family needs him makes her childhood more tragic. However, now Sajal’s younger brother is in Australia for studies; her sister Saboor Ali is also getting worthy projects.

She has completed her early education in Lahore, her birthplace from Lahore Grammer school then went to Becan House; according to some sources, she is an undergraduate.

Sajal Aly and Ahad Raza Mir both the famous actors tied a knot on 14th March 2020, just before lockdown. This power couple had a destination wedding in Abu Dhabi, UAE.

Sajal made her first appearance on screen in 2009 with a small role in the drama serial ‘Naadaniyan’ opposite Nida Yasir, Danish Nawaz, and Mohib Mirza. After her debut, she took a pause of 2 years and in 2011, she was yet again seen in a serial ‘Mehmoodabad Ki Malkain’ opposite her sister Saboor Aly. She got an appreciation for her performance which made her recognizable among directors and viewers. After a few times, she got various offers and showed herself with each passing year. She is a multidimensional actress who fits herself in every character she plays. She has done intense roles, comic roles and negative roles and got equally praised by the people.

Sajal Aly has been a part of various highly watched serials, including;

And numerous more but the serial which gave her the best actress award is ‘Gul e Rana’ in 2017 which showed to be her one of the best serials of all time. It wouldn’t be incorrect to call 2018 a lucky year for her. She was offered numerous awards for her drama serials ‘Yaqeen Ka Safar’ opposite Ahad Raza Mir and ‘O Rangreza’ opposite Bilal Abbas Khan. Her role as Chammi in her famed drama serial ‘Aangan’ has received regard and admiration from all over and people can’t stop assuming her the next superstar of the industry. She is all set to give another hit serial ‘Alif’ opposite Hamza Ali Abbasi which is going to be released soon on HUM Tv.

Sajal made her Lollywood debut in 2016 by working in the film ‘Zindagi Kitni Haseen Hai’ opposite Feroze Khan and other stars. The film received a massive earning of ten crores at the box office with a budget of 4 crores. In 2017 she made her Bollywood debut by working in the movie ‘Mom’ opposite Indian actress Sri Devi and Adnan Siddiqui. The film went successful at the box office with a hit of more than 100 crores which also developed a significant relation between Sajal and Sri Devi.

Additionally, the talented girl with acting skills is also blessed with a great voice. In 2017 Sajal sang an ost of her drama serial ‘O Rangreza’ with Sahir Ali Bagga which turned out to an exceptional and amazed everyone with her beautiful voice. She every so often sings in different Television shows but has no plans of pursuing a singing career yet.

The most promising actor has also received a lot of appreciation from the audience and awards show for the quality of dramas she gave. A few of them are;

Pakistani actress Sajal Aly has also added another achievement to her career as she was awarded for her contribution to film and Television by the Distinctive International Arab Festivals Awards (DIAFA).

This beautiful young actress has gained fame in significantly less time because of their stunning cute looks and her acting style that made people fall in love with her performance.

Currently, she is living with her husband Ahad Raza Mir son of Asif Raza Mir a famous actor of his time. Together they made a perfect couple and she married Ahad in March and since then, her only drama Alif get on aired and others are in the making. Hope to see her with some great projects in the future.

Dhoop Ki Deewar is the upcoming web series of Ahad Raza Mir, Sajal Aly, and others. It is a love-hate story based on the love-hate relationship between the people of India and Pakistan.