Sajal Aly did a hilarious mimicry of Aamir Liaquat. Aamir, who recently came into highlights because of his insensitive jokes regarding the deceased Irfan Khan. In a video, Sajal is with her friends and mimic the anchor.

Moreover, her hilarious style makes the mimicry video more alluring. Her friends, who are sitting beside her clapping and laughing about the mimicry.

Earlier, Sajal made a painting of her soulmate and husband, Ahad Mir. The Painting went viral on social media too. 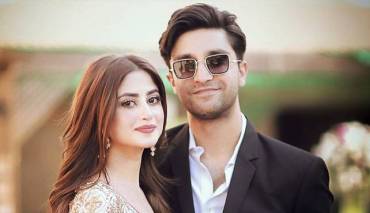 “Trying out other art forms and trust me it’s not easy to capture this man’s beauty
What do you think?”, says Sajal admiring her man.

Trying out other art forms and trust me it’s not easy to capture this man’s beauty 🤣 What do you think ?

Sajal Aly is one of the most glamorous stars of Pakistan. Her innocence coupled with brains and beauty is a rare combination.

And Coronavirus Is Gone, We Are All Hopeful For Tomorrow – Roy Started It
This Couple Is Giving Us Major Goals After Their ‘Romantic’ Quarantine In Hunza
To Top