Unfortunately, some liberal and pseudo-flag-bearers of women’s rights have portrayed a tarnished image of Pakistan across the globe. Notwithstanding, there are fathers despite being Imam of a mosque supports the rights of their daughter. Recently, the athlete Sahib-e-Asra shared heart-warming images and post on her official Twitter handle, depicting her love for her father.

“My father, a Masjid Imam”

Proud is when you stand with your father & your father is proud of you.. My father who is a Imam Masjid always support me even when ppl criticise him but he always back-up me & encourage me.. being a daughter I’m very thankful & proud of my father.@MusadaqZ @SportsAwardsPK pic.twitter.com/GyU8bbM6lz

According to her Tweet, Asra’s father is very proud of her. She asserted her father stood by her when the whole world besmirched her. She said that her father always encouraged and supported her. Besides, Sahib-e-Asra exhibited utmost gratitude towards her father. 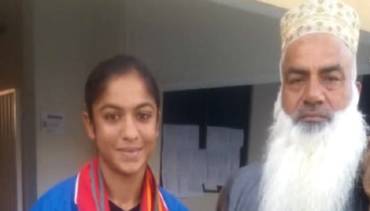 Asra is Pakistan’s fastest women athlete. She has the honor of winning 100 meters gold medal in the national athletics championship. Last year in December, Asra participated in 4×400m relay at South Asian Games Nepal and became a shining star.

Sahib-e-Asra belongs to a middle-class family. She never let her background come between her dream.  Her father Qari Alam Khan, is an Imam in a mosque. Her father never let the caustic stereotype remarks come under the way of his daughter’s career. Qari Alam wholeheartedly supported his daughter and showcased to the world that Islam is not about bounding women. This is real feminism, isn’t it? Not like those showcasing provocative slogans in a woman march and doing nothing in practical for the betterment of women.

In a video message, Asra said that “I started my running career from a government school and competed at district, division, and provincial level,” She further added that: “I have given the best times in running in Pakistan after ten years.”

This is how the senator Murtaza Wahab reacted to her tweet

Not just ur father, the entire nation should be proud of u and what u have accomplished. Lot of respect and regards for u and ur father https://t.co/hDbzQIX84F

More power to you and God bless you and your brave and determined Father. He is a role model. Ma sha’ Allah https://t.co/uRQcDExHP5

So proud of you @SprinterAsra .I salute your father for supporting you & thank you for your hard work, your courage. Never give up 💪🏼☝️❤ https://t.co/lPoYrvkT7J

Everyone salutes the brave lady

Brave and strong girl. I salute you and your lovely father. #PakistanZindabad 🇵🇰🇵🇰

The duo of a great father and daughter

I know about you and your family very well, I just want to say keep going on with more force your father is such a great person as well as teacher. As I’m student of your father you were my class fellow in masjid. ALLAH apko or kamyabian dain Ameen

Indeed, she has inspired and still inspiring many women

May Allah bless you lots of success and happiness.More power to you..keep going and you have the responsibility to inspire young girls to do something extra ordinary and be strong. You tell them your story and motivate them to be someone worth following.

Sahib-e-Asra and her father Qari Alam is a slap on the face of those people who think practicing Muslims hinders the path of their daughters towards success. The duo showed the world, Islam is not about invalidating women’s rights but about elevating the status of Eve’s daughter.