Pakistan, the land of pure, has a place for all the religions, castes, and creeds. In the land, people of all religions live freely, There is immense cordiality between Muslims and Hindus. Recently, during the pandemic of COVID-19, a Hindu guy named Sagar Langhani helped more than 1200 families. Besides, Sagar has done various other philanthropic works.

Sagar’s batchmate, Sajjad Hussain, narrated Sagar’s saga to Parhlo. Hussain mentioned all about the dignified, Sagar, and his ventures in helping others.

For Sagar religion does not matter but humanity does

The road that comes to cites, goes back to the village as well. This has been proven by a Hindu guy, Sagar Langhani who came to Karachi with intentions for higher education. If philanthropy had a face then he best fits for it. From a struggling family, born at Samaro district Umerkot, Sagar has proven that dreaming big is possible with open eyes but accomplishing that dream is a big success.

While graduating from a renowned institute of Karachi, he engaged himself for the betterment of society too. Being a Hindu and conducting Iftaar drives in different localities of Karachi is also appreciable. Most applauding thing of his social work is that religion does not matter to him because in a conversation with him, once he said to me that the biggest religion in this world is humanity.”

The current scenario of COVID19 is a big test for everyone but the biggest challenge is for a privileged class that how far they could go to help the poor. But being an individual, Sagar has stepped forward and helped the poor people of Tharparkar and Umerkot.

The ration bags distributed among the citizens contained basic food for the household. Source of funding for the ration drive in lockdown is from the community, people living abroad, and Pakistan. Ration has been distributed among the needy by a three-stage verification process. In the first data of needy was collected, then that list was verified by neighbors and lastly, the shortlisted were provided the ration. 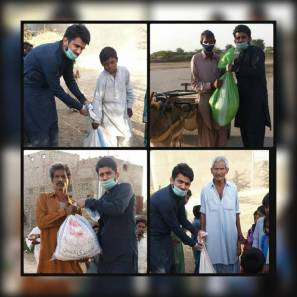 Now the good thing that came out during the ration drive was the honesty of people that many refused from taking ration by stating that they have sufficient food. An amazing thing to discuss here is, a house of a transgender who refused from taking ration bags by saying they have enough food for a few days, they considered their neighbor Trans genders to be helped first. This example of honesty is to be written with golden letters.

Some people just pretend that they are trying to help us but actually they are not. Sagar has broken this stereotype by proving himself a helping hand. When it comes to the COVID-19 crisis, soon after the lockdown was imposed nationwide and people adopted social distancing, many were made jobless and went back to their home towns. This includes house workers who were the only breadwinners of their families.

The good thing about people was they refused to ask people to help them because of their self-respect. Sagar silently collected their profiles and with simple verification by their neighbors, he gave them ration bags. Not even this, cash was also given to people to solve their financial issues.

When it comes to knowing who is there to help you out, the right time is to test them in your difficult time. Sagar is the best example of our society that there are people who come first when there is a need for help. This proverb ‘a friend in need is a friend indeed’ has proven right in his example that hard times like COVID-19 was a real testing time. Although the number is too small if we all start thinking like Sagar, then change is not far away from us. All we need is ‘initiative’. If we talk about numbers, 1500 ration bags were distributed and more than 1200 families were helped financially. This is an example for those who say “Ek bunda kya kar skta hai?”

A small chat with Parhlo

Parhlo: What motivated you to do this magnanimous act?

Sagar: “It was a day of the moon celebration (a Hindu religious day) when I was distributing  Daal Chawal to people at a temple in Samaro town. Randomly, withholding bucked filled with rice in my hands, I went to a nearby small village I distributed rice there. After the distribution, I realized that I only gave them the food for only onetime. Later on,  I got to know that they have nothing to eat at night. This how I got motivated for helping others.” 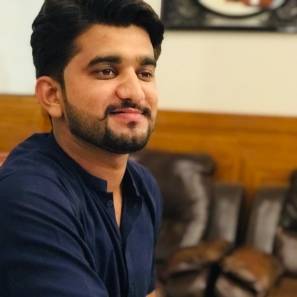 Parhlo: How did you feel after helping others?

Sagar: I felt like I am in heaven. We are human beings, our skin is alike, there is no difference in our blood. So, I think humanity is above every religion. Hence, the happiness I got during this journey is indescribable.”

Parhlo: What will you do in the future, are you planning to run an NGO for such philanthropic works?

Sagar: “I would love to continue such philanthropic work. Soon, I will initiate a thorough platform to help those in need.”

Parhlo: What is your message to the youth?

Sagar: “After the lockdown, I realized people indulged in various time-killing activities, such as playing games. At this time, I went on with an idea to circulate a message on social media regarding helping others. I got immense help from friends and acquaintances in the shape of money and good which motivated me further to distribute ration in the lockdown. Hence, my message to youth is, you can use social media platforms in a positive way to help others. Instead of wasting time, we should help those in need.”

In conclusion, Sagar is an asset to Pakistan, just like Jaint Kumar who is reviving Hindu-Muslim respect. Sagar with a golden heart has helped several people without any discrimination. Currently, he is distributing hand pumps to Tharparkar. The story written by  Sagar’s friend is quite alluring. It depicts how a man can do anything if he truly desires to. According to Sagar,  he is going to work 24/7 for the betterment of impoverished people across Pakistan.