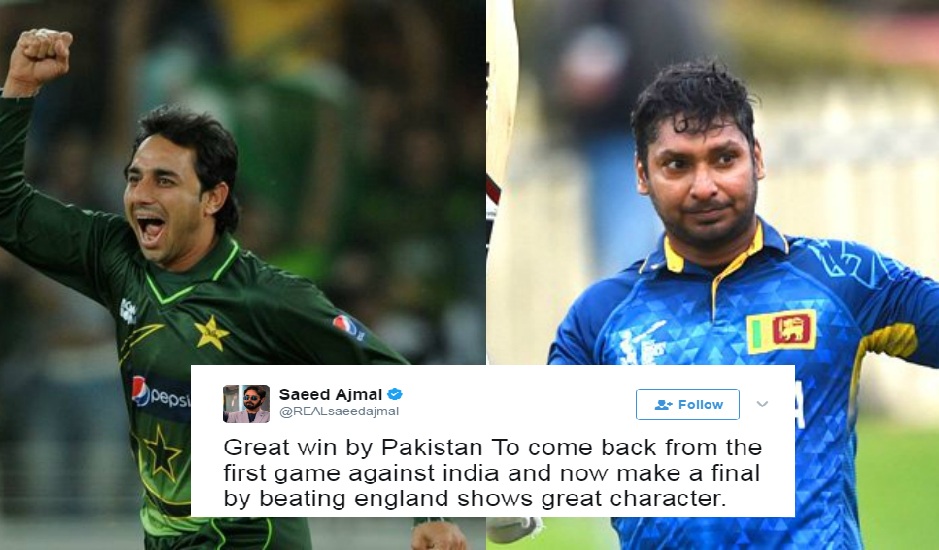 Pakistan has now entered the finals with a crushing win over England in the ICC Champions Trophy 2017! The team played brilliantly with their exceptional bowling, which left the fans – absolutely STUNNED!  The entire nation commended the victory with joy and lauded the whole team, in fact, each of the players, individually! Indeed, Pakistan was at its exhilarating best and it was a proud moment for all!

However, a majority of people were active on social media expressing their joy. But, we couldn’t miss out on what was happening on Twitter. Along with the fans, there were other cricketers from different teams who were congratulating Pakistan for the great win, including Saeed Ajmal and Kumar Sangakkara. Who knew their tweets would go viral?

It all started when Kumar Sangakkara, former Sri Lankan cricketer, and captain expressed his remarks…

Great win by @TheRealPCB. To come back from the first game against india and now make a final by beating england shows great character.

Great win by Pakistan To come back from the first game against india and now make a final by beating england shows great character.

Well, that escalated very quickly… LOL! The Twitterati’s sure had a keen eye on the tweets and starting replying to his tweet and it was all very hilarious!!

He seemed really annoyed… and we can’t blame him. LOOOOLLLL

We do think that Saeed Ajmal shouldn’t have done this… It was okay if he had retweeted Kumar’s tweet, but hey, what was he thinking? Maybe he just needs to polish his tweeting skills 😛

Let’s just hope Saeed Ajmal doesn’t repeat the same thing again, or else… the Twitterati’s are watching and the world of internet is SAVAGE. We sure had a good laugh and couldn’t believe it at first, but we’re humans and we make mistakes… and we learn. Always.

What are your thoughts? Do you think what Saeed Ajmal was right?

Pakistani Actress Mansha Pasha Didn’t Hesitate One Bit While Roasting Ramadan Shows And Transmission!
Muslims Returning From Mosques After Sehri Helped Save Many Lives during the London Fire
To Top