Sadaf Kanwal Just Took A Dig At Mansha Pasha On Her Acting And The Cat-Fight Is Starting!

The entertainment industry of Pakistan these days has turned into a bashing parade sighting a reason for cheap publicity, maybe? Time to time, the masses witness some famous actors or models bashing each other on television shows without thinking twice creating a chaotic atmosphere on the digital platforms.

After Firdous Jamal, Sadaf Kanwal is facing criticism for her negative take!

Earlier this year, the veteran actor and a major part of the country’s acting fraternity, Firdous Jamal said that Mahira Khan is not ‘heroine stuff’ and she should start considering mother roles now. The sexist remarks got Firdous Jamal in hot waters and Pakistanis were extremely disappointed. Recently, a well-known face from Pakistan’s modeling industry Sadaf Kanwal is facing severe criticism after she tried to pummel actor Mansha Pasha on a TV show.

Model Sadaf Kanwal thinks that actor Mansha Pasha should not be in the entertainment industry!

Alongside acting, a famous actor of Pakistan Ahsan Khan is hosting a TV show named ‘BOL Nights’ where celebrities are invited to be a part of some fun-filled segments. On Saturday, Sadaf Kanwal and Azfar Rehman were the guests on the show but things got a bit ugly while Ahsan Khan was having a rapid-fire round with the model Sadaf Kanwal.

During the rapid-fire play, Ahsan Khan asked Sadaf Kanwal that which actress do you think should not be in the industry? At first, the model asked if she could have some name options but after getting no choices from the host, she took a mini pause and without thinking took Mansha Pasha’s name. The unexpected answer literally got Ahsan Khan in shock and only one thing came out of his mouth in a deep voice, ‘why’? 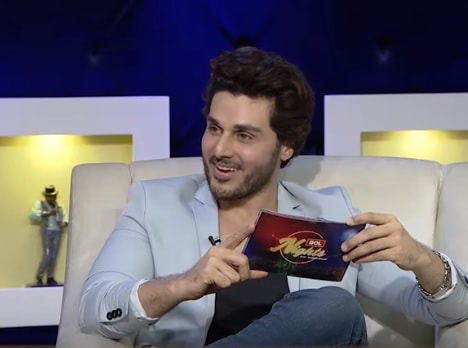 Well, the model’s silly answer to Ahsan Khan’s deep ‘why’ didn’t justify her take on Mansha Pasha at all. Sadaf Kanwal tried to cover up after she saw the reaction by saying that Mansha Pasha is so beautiful that she should stay at home. To which Ahsan Khan said that she (Mansha Pasha) is such an amazing actor and Sadaf Kanwal sharing her opinion on the host’s statement said ‘so am I’.

Apparently, as the show was watched by the Pakistani awaam, a wave of sheer criticism poured in for Sadaf Kanwal on social platforms. The internet was full of positivity for Mansha Pasha while Sadaf Kanwal was severely rammed. As the statement picked up the heat, Mansha Pasha also took to her official Instagram and responded to Sadaf Kanwal’s naive remarks.

This is what the actress posted on her Instagram story! 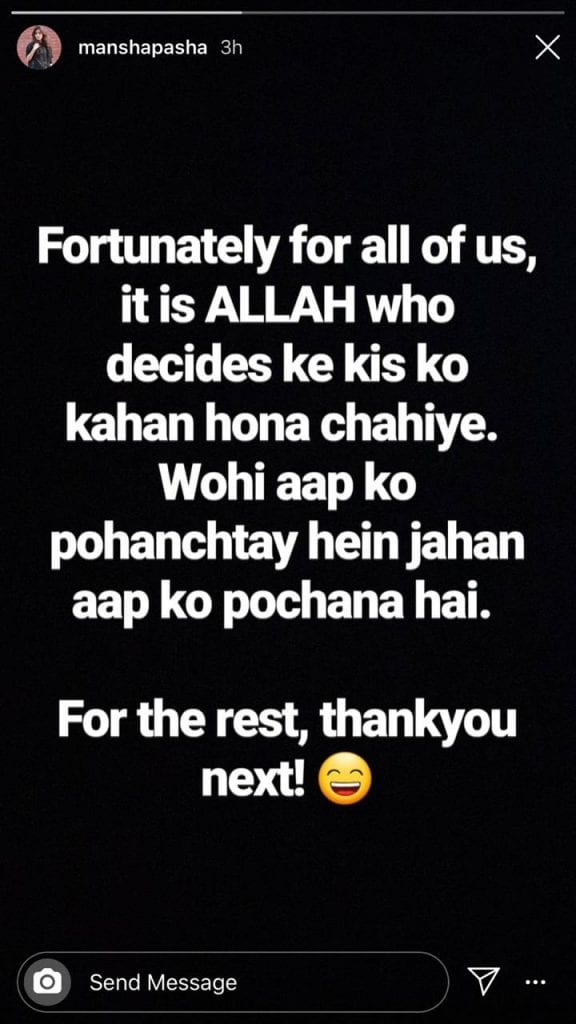 Check out: After Mahira Khan and Saba Qamar, Indians are Praising Sadaf Kanwal for her Item Number!

The actress, Mansha Pasha with wit and maturity, clapped back at Sadaf Kanwal without even taking her name. She wrote, “Fortunately, for all of us, only Allah decides who should be where and when and only He takes you to that place. For the rest, thank you. Next!” This was indeed the calmest response to some silly criticism.

Share
Tweet
Share
Share
Email
Recent Posts
Trending Posts
Novel Coronavirus Awareness Message
Avoid touching your eyes, mouth and nose.
Avoid close contact with individuals that are sick.
Clean household objects that are frequently touched.
Wash your hands regularly for at least 20 seconds
Urdu
Lawyer Who Slapped a Female Constable Released Without Punishment And That Is Everything Wrong With the System!
Punjab Lady Constable Resigns After Seeing No Signs Of Justice In This Cruel System!
To Top