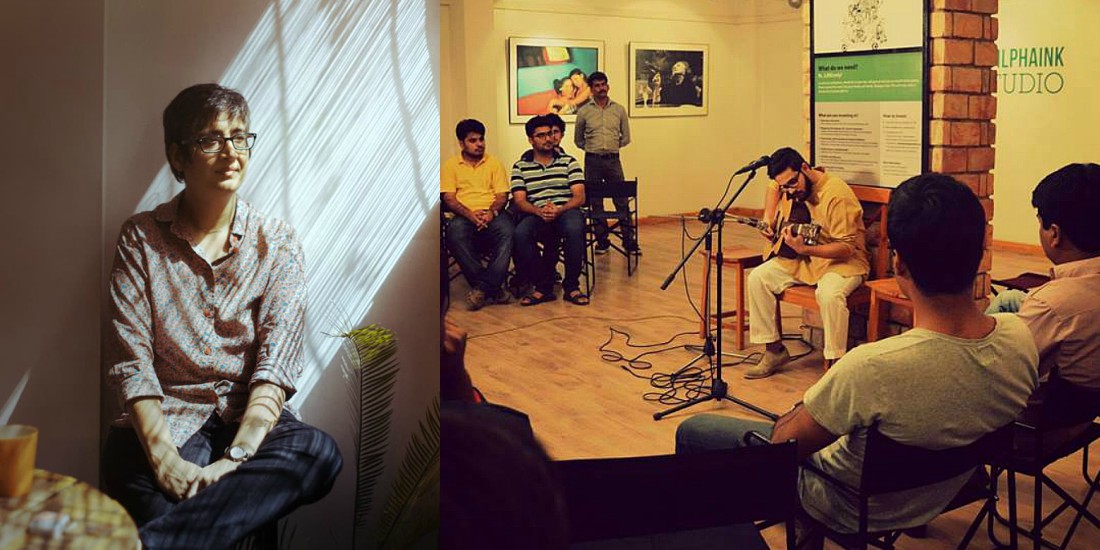 T2F (the second floor) is the first project of PeaceNiche which was founded by Sabeen Mahmud. The space was created for open dialogue for the community. A platform to bring social change through cultural activities. It’s a cafe located in Karachi, a vibrant and peaceful place to be in. The aura and ambiance soothe people and the serenity is beyond words. Sabeen Mahmud who’s known by her name and work that she has done for people. Formerly a member of Human Rights Commision (Lahore) worked really hard to build a foundation where all the taboos and myths were broken down by talks and public discussions.

Sabeen was assassinated in 2015. A few kilometers far from her office, she was gunned down by a student of an esteemed institution. After her death, the cafe was run by her friends. It flourished and still served its purpose of existence. Recently, the management was changed but the working employees and other staff remained the same. However, a post went viral and later removed by one of the “new” management members. As ironic as it is, the caretaker of the community is now exploiting the basic rights of the community.

“I understand the anguish and pain of T2F’s well-wishers on this difficult decision, but sometimes such hard decisions have to be taken so that the organizations can survive. We should also try to understand what were the options available to the executive committee when it found out big thefts in the organization by those who were trusted by everybody associated with T2F. The options were: 1. Let it happen and remain silent; 2. Fire the concerned individuals without announcement; 3. Fire the individuals and announce it. Had T2F opted for the second option, people would still have asked the executive committee to give the reason. Most of you know that a couple of years ago, due to the paucity of funds and operational losses, there was a danger that T2F could close down. It has become increasingly difficult to get institutional donations and T2F has to rely mostly on individuals well-wishers of T2F to keep it going. The few organizations who are still supporting us want us to account for every penny given to T2F and ensure complete transparency. All donations are audited. Despite financial issues, T2F was sensitive to the needs of its employees and gave them substantial increments and benefits. Plugging the holes was important for the organization to survive and it was done, which is obviously not pleasant.”

Sadia Khatri is known as Karachi’s chai rebel, who is a writer and a social activist. She wrote a reply on how the organization is now kicking the employee who stuck with the organization in every manner. Chand and Majeed were working as the lower staff and were very humble to every stranger that came to the cafe. The cafe accused the two of theft and fired them. But the management did maintain the reputation of the organization and publically announced it on social media. As the cafe was built to care for the community, so they are keeping everything ‘Transparent”.
Sadia’s reply to the removed post:

In light of your commitment to ‘transparency’, which you claim is the reason behind this public act of bullying and humiliation, perhaps the Executive Committee would also be interested in telling us about Ajay and Mukesh, who were also asked to leave simply because of their relation to Chand? Or about the number of OTHER employees who were asked to leave or who “resigned” from T2f in the past 2 years due to various reasons / disillusions / bullying tactics? What about all those exits? Why is your transparency limited? Is the Chand/Majeed case different because you know very well that their class difference and their socioeconomic background makes it difficult for them to fight back? If you were expecting the ‘community’ to pat you on your back for this gesture of honesty, you are horribly mistaken. It is about time that the Executive Board actually reflect on the sentiments and positions of the community they seem to evoke in every statement, the community you claim you care so much about. None of this reflects the spirit of a community. This kind of finger pointing behaviour and prioritizing bureaucratic structures and measuring progress by the amount of paperwork and procedures in place, over the work of individuals who have built and nurtured this same place out of scratch— Nadeem, the community is heartbroken. In this statement you make Chand and Majeed sound like criminals. I have reason to doubt the allegations themselves, but even if they were true: where is the dignity and respect afforded to Chand and Majeed? Or, are we simply to erase everything they have done for T2f, for ‘the community’, for those of us who are speaking out in their defense now, asking you to zoom out and think about the way you are handling this? But it seems that community has become a buzzword for you to collect donations, you don’t actually care what we think. It seems the issue here is greater than a simple matter of funds going awry. It is, in fact, a ‘humanitarian crisis’. One where the T2f executive board has forgotten to treat its own family like human beings. Because that’s what Chand was and is to so many of us, Nadeem. He was family. You don’t shut family out like this. You don’t treat family like a dispensable cog in the machine, and then pride yourself for discarding them in a public announcement. What a slap on the community’s face. A community which has existed since a long time before this executive board started going on its power trips, and a community which, by the way — is still alive and kicking — but don’t make the mistake of looking for it inside T2F anymore. The community exists outside, in these comments you are turning a blind eye to, in these voices that will keep calling you out every time you wrong one of ‘us’. Just as you have turned your backs on Chand, Majeed, Ajay, Mukesh, and so many others we have seen you chase out in the last two years, we are now turning our backs on you. It is too late.

#BoycottT2F – and let them know you are doing it.

After Sadia’s reply to the notorious post by The Second Floor, another reply came by. Not of a member of the cafe or someone who just visits it for the ambiance, but a former employee of it. Asad Alvi is a student of Liberal Arts and a writer. He worked at T2F as a creative project coordinator. His reply had many people raising eyebrows on how such a place could go so cruel.

How T2F is now using in an apologetic post words such as ‘our friends’ and ‘well wishers’ to cover up their own violences and biases against Chand and Majeed, to cover up for the new Board’s attitude against the cafe’s working-class staff. T2F, you owe it to ‘your friends’ NOT to have removed the post you uploaded earlier. It has hurt our feelings more now that you’ve removed it. You removed it so you can remove all traces of the kind of violent rhetoric you have been using against T2F’s employees and stigmatizing them for their class background.

This is what happens when you give a space that once thrived itself on democratic discourse to capitalists and neoliberalists who project their classicism and their phobia of working-class people onto the organization’s most committed employees. For those of you who did not read the earlier post, the new T2F board has accused Chand and Majeed – the oldest employees of the organization – for embezzling money.

Think about it: Chand stealing money. The person who steered the organization through thick and thin. The ship; the rock. Shame be upon all of us. Shame be upon you. Ever since capitalists took over the cultural space, they have been treating the staff there like shit – as some ‘chors’ and ‘muggers’ who steal money and are a threat to the organization’s (now capitalist) order. This is what happens when capitalists run cafes. They reflect their own classist values onto the organization. As a former employee of this space, my own ears have been privy to this classist rhetoric for too long and it is high time we break the silence around this spectacle. To hear neoliberalists talk of accountability and transparency, those who exploit working-class labor on machine-lines. Wah bhai wah. Kia din aagaye hain. Chori upar se seena zori ho rahi hai.

What’s your take on this issue, do you think that an old employee (if caught doing wrong) should be humiliated publically by announcing it to everyone? Write in the comments below to let us know.