Have you watched Hum Aapas Mein yet?

This new 8-episode comedy series is here to teach us the joys and perils of living together. The premise, as the trailer puts it, is simple: “Five Families. One Roof. What could go wrong?”

The first episode of ‘Hum Aapas Mein’ really gets you hooked!

In the first episode, a smug, quirky narrator introduces us to the five families living in Ronaq Manzil. Different from each other in every way (or so they would like to believe), the residents battle water shortage, crime, encroachment, ethnocentrism and their neighbors. As the story progresses, you begin to understand and empathize with the characters, rooting for them to come together.

A young boy and his friends become fascinated with a plate that he is not allowed to touch because it belongs to the housemaid. The children start investigating the sinister force that lies within this plate, ultimately arriving at an eye-opening revelation.

To address the hate that migrants sometimes get, Hum Aapas Mein turns to its most interesting family: four transgenders, one of whom has just arrived in the big city and has unwittingly upset the balance. Will she ever truly belong to the city and to this family? 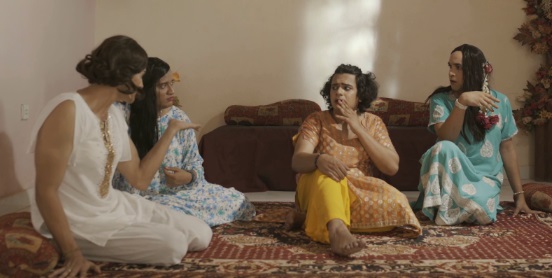 Although the plots are often too simple, and at times predictable, the dialogues are engaging. And as you breeze through the eight stories (they are only 10 minutes each), you will notice the well-defined character arcs. Shaukat Qureshi, for example, is at first a bigot who would not consult his neighboring doctor because she subscribes to a different sect. But by the penultimate episode, he is vying for his Hindu neighbor to teach his children Islamiat.

In a hilarious ensemble piece, the residents resort to finger-pointing and paranoia when thefts start occurring in Ronaq Manzil. Their recourse is a wildly colorful aamil who has clearly arrived with an agenda. It is this story that reminds the viewer of how these characters have changed.

Perhaps the most impressive feat of Hum Aapas Mein is its realism, made possible not only by its crisp dialogues and performances but also because of its technique. At a time when viewers are bombarded with quick-cut vlogs, Sabeeh and his cinematographer Asghar Ali Ghanchi opt for immersive “long-take” scenes that unfold without a dull moment.

Although the sound design is far from perfect, with some scenes betraying its ADR recording, the music is surprisingly very powerful for a web series, with each family having its own leitmotif. The art direction and wardrobe choices should have been more detailed, especially for the transgender characters, but here’s hoping the next season improves on that front!