Saad Saleem - The Man Who Claimed To Provide Free Education 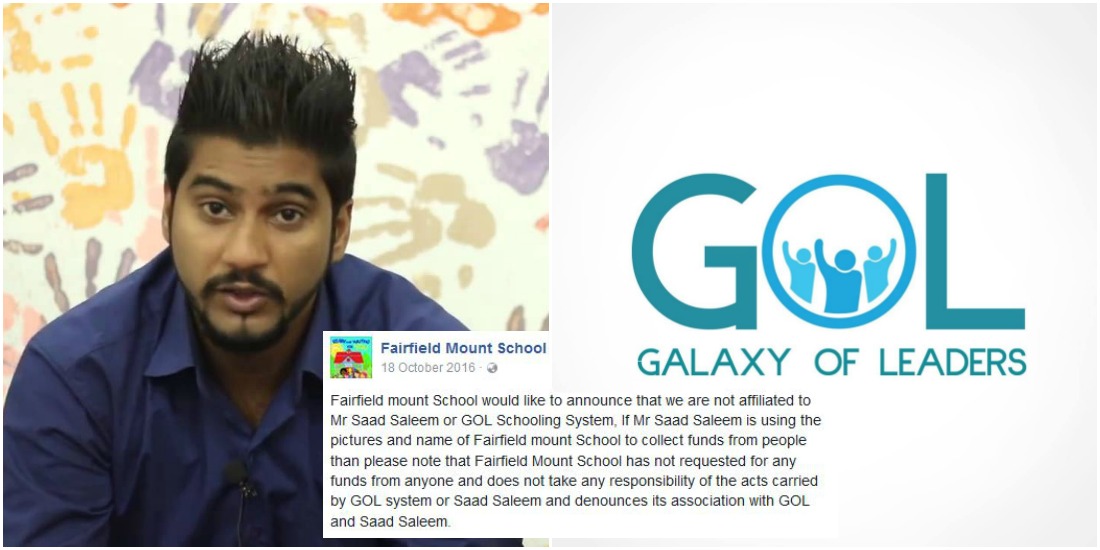 When you type in the name Saad Saleem in any search engine, what usually pops open is the information about a guy who wishes to start free O and A Level schools for underprivileged children. A social entrepreneur aiming to provide free education to children, he started Galaxy of Leaders (GOL), a program to help train future leaders, innovators, change makers; people who can solve Pakistan’s greatest challenges. However, who would have known that the oasis that we all were seeing from the far was just a mirage…

People have suddenly started exposing the real face of GOL and its CEO, Saad Saleem in a way no one ever expected. Here is the story of Bushra Rajput:

Just after she uploaded this post, another person named Ali Ahmad brought up his experience with Saad Saleem. Here is what he revealed about this situation:

Saad saleem was one of my good friend for around 6 months and I met him on the orientation day at red river college he took sales and marketing 1 year diploma there which he was kicked out of the college after 6 months. He borrowed around a total of 2500 CAD from me and my friends saying he really need that money to get food and Medicine for his family, after taking that money he disappeared for around a month we tried to contact him but he did not reply he has not returned our money. Meanwhile he was working illegally in Canada and the place he was working at saying he was caught stealing money and was reported to immigration from there he got deported from Canada. I saw few of his clips and realized that every single word he said in his seminar was a total fake and it had no truth to it. He has never been to USA and never worked at professional job in his life the only highest education he has is his 12th from Pakistan and a English language course done from Saskatchewan. This post is only to inform people that he is a fake person and if he can deceive his good friends who genuinely wanted to help him he can deceive any one do not trust him!!!
If you want you can contact me for more information on him or else ask my name to him or show him this post cuz I myslv is the biggest prove.
I have added piks for people who are doubting if I ever know him

These claims led to an outspread of rumors and soon everyone started to realize, and then eventually even the news media became aware of this. Here is a short clip of ARY News:

Saad Saleem has been a part of a renowned NGO, the Universal Student Alliance. The organization aims to provide enhancements in the education worldwide, yet it could not help Saad Saleem in being truthful and honest with his supporters. Offering 100% scholarships, he claimed to provide free O and A Level classes for children belonging to underprivileged backgrounds. Using the name of Fairfied Mount School, Saad Saleem and GOL set up the entire program. However, about seven months ago, the school publicly stated that they are in no way affiliated with GOL and their name is wrongly being used by Saad Saleem.

Being called as a guest speaker and a motivational speaker in morning shows, Saad Saleem gained a lot of reputation through the picture of a beautiful, yet a deceptive idea.

Great News For WWE Fans Because The Apple-Spitting Carlito Is Coming To Pakistan!
This Guy Went To Katas Raj Temples And What He Saw There Was Absolutely Heartbreaking!
To Top