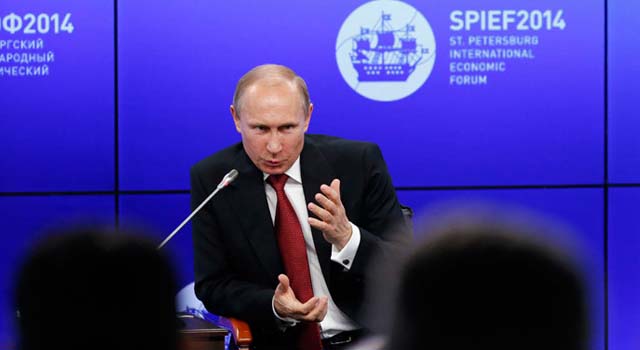 Though Ukraine continues to plunge into chaos, Russia is ready to work with whoever is elected in the presidential elections on May 25, President Vladimir Putin said. He added that after the ballot all military actions must be stopped in the country.

â€œWe are now working with these people who control the power, but after the elections we will work with newly-elected structures,â€ he said.

Putin said that Russia will respectively treat the results of presidential elections in Ukraine on Sunday.

â€œWe understand and see that people in Ukraine want their country to escape this long-drawn-out crisis. [Russia] wants some relief [in Ukraine],â€ he said.

The president said he hopes that as soon as the elections are held, all military actions will be stopped in the country.

â€œThe situation [in Ukraine] is becoming worse as Kiev authorities continue their punitive operation in the east of the country. The military actions donâ€™t stop. [They] use artillery, tanks, APCs. The shells fall at houses, peaceful civilians die,â€ he said.

Putin believes that the conditions for Ukraineâ€™s elections do not correspond to international standards.

â€œ[Armored personnel carriers] are firing there and journalists are being captured and detained â€¦ What are the conditions for holding the elections?â€

Russia is tired of how the West discusses Ukraineâ€™s crisis with Moscow with â€˜Itâ€™s none of your concernâ€™ answers,â€ said Putin.

He said that Russia had offered dialogue with Western countries, but hasnâ€™t received any consultations, only slogans.

â€œLook, they made a coup, but they donâ€™t want to talk to us. What thoughts do we have? The next step is that Ukraine joins NATO. We have never been asked and we donâ€™t have any dialogue,â€ he noted.

So tomorrow Ukraine may join NATO, and tomorrow the US Missile defense will be located there, Putin added.

Still Putin says he believes that the situation in the crisis-torn country will calm down and relations between Moscow and Kiev soon become normal.

Russia gave free will to the citizens of Crimea, otherwise the peninsula would have seen the same massacre that happened in Odessa on May 2, President Vladimir Putin said.

â€œIf we hadnâ€™t done this [in Crimea], we would have had more tragedies than those which we now see in some Ukrainian cities, for example, in Odessa, where unarmed people have been burned alive: Fifty people have been burned, another 50 went missing. Where are they? They are killed, too,â€ Putin said at the St. Petersburg Economic Forum. 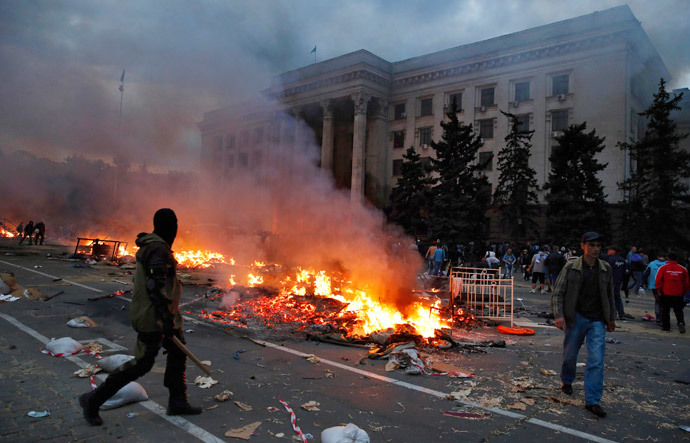 He added that Russia has a clear position on Crimea.

â€œWe gave free will to Crimean citizens. They arrived at the referendum [March, 16] and voted for their own future,â€ he said, adding that it is impossible to make more than 90 percent of the voters to come for the referendum and vote for joining Russia.

The problems with Ukrainian and Crimea are caused by the absence of trust in the world, believes the Russian president.

â€œTo gain trust in the world, we need dialogue,â€ he said, adding that Russia counts on the constructive dialogue with the EU on a new partnership deal.

Meanwhile, Putin believes that after the February coup, Ukraine plunged into chaos.

â€œWhere sis Ukraineâ€™s crisis come from? It appeared because the Ukrainian president [ousted Viktor Yanukovich] delayed the association agreement with the EU,â€ he said. â€œThe civil coup supported by American and European partners came afterwards. What next? Chaos, and now what we see is a full-scale civil war.”

Speaking on the sanctions issued by Western countries on Russia, Putin said that they have a boomerang effect.

â€œIsnâ€™t it evident that economic sanctions as an instrument of political pressure have a boomerang effect and finally affect the businesses and economies of the countries which issued them [sanctions],â€ said Putin.

The Odessa Massacre erupted on May 2 after clashes between anti-government protesters and radicals supporting the coup-imposed authorities in Kiev. The confrontation led to a tragedy that left 48 people dead and over 200 injured as nationalists burnt the protester camp and then set fire to the Trade Unions House with anti-Kiev activists trapped inside.

According to witnesses, many of those who managed to escape the flames were then strangled or beaten with bats by radicals. Several victims reportedly died of gunshots, while others were burnt alive or jumped out of windows in a desperate attempt to escape the deadly flames.