Pakistan’s entertainment industry is currently in its revival mode but the content being produced is definitely touching the quality quotient. The amount of effort and sheer hard work the makers are giving in defies all when the final piece reaches the big screen. The amazingly talented group of directors, producers, scriptwriters and everyone affiliated with the industry highly ensure that the project being produced is much liked by the masses.

Sequal of “Alpha Bravo Charlie” is in the works!

If we go back to the “Sunehray Din” when Pakistan’s show business industry was on its boom, the dramas and movies made back then still occupy many minds. The famous Pakistani military drama serial of the 90’s era “Alpha Bravo Charlie” has a separate fanbase and the viewers still enjoy watching it. To preserve the perfect storyline, recently Momina Duraid (MD) Productions is said to be bringing back the same plot in the name of “Ehd e Wafa” and Pakistanis can’t stop going gaga over it.

Also read: Cpt. Gulsher Reunites With The Same Waiter After 15 Yrs Of That Epic Alpha Bravo Charlie Scene & We Love It!

The talented cast of ‘Ehd e Wafa’ has already made the digital frenzy crazy!

Hitting the Television screens on the 22nd of the current month, the skillful lead cast of the show includes Osman Khalid Butt, Ahmed Ali Akber, Ahad Raza Mir, Wahaj Ali, Zara Noor Abbas, Alizeh Shah, and Hajra Yamin, respectively. As per the gathered information, Ahad Raza Mir is believed to be playing the role of the most liked character back then, Captain Saad. The actors involved in the project are also seen posting about the upcoming drama on their social handles and Alpha Bravo Charlie lovers are anxiously waiting for the sequel to be released.

After Shoaib Mansoor, Momina Duraid is ready to bestow the Pakistani Television with “Ehd e Wafa”!

Reminiscing about 1998 original “Alpha Bravo Charlie” just brings back all the nostalgic memories of the viewers associated with it. The legendary director of the country, Shoaib Mansoor was the mastermind behind the exceptional portrayal of Pakistan’s military life under the production of Inter-Services Public Relations (ISPR) and was aired by Pakistan Television Corporation (PTV). Now, following the lead, Momina Duraid is ready to bless our Television screens with the same genre again and hopes are really high. 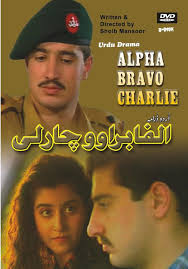 Based on the actual military life and cast filled with real-life army men, the 1998 PTV classic touched the success sky for all the right reasons. Captain Abdullah Mehmood, Faraz Inam, Retired Colonel Qasim Khan and Shehnaz Khwaja were the esteemed part of the widely acclaimed “Alpha Bravo Charlie”. Currently, social media is full of appreciation and good wishes for “Ehd e Wafa” and the excitement is real.

The teaser of “Ehd e Wafa” is giving all the right feels. Woah!

The most cherished bond of the ’90s!

There is something in this SHOT that melts my heart everytime i see it🙈❤
The height difference though-
Faraz and his son Saad💗😭Happiness on their faces!!#EhdEWafa pic.twitter.com/RLjRYifOvI

Lol! Definitely they are!

I am rooting like hell for these four namonas😅🙈Each one of them is😂😁
They are Setting new level of BROMANCE🔥♥️#EhdEWafa pic.twitter.com/gJ6AjZRaAY

Check out: You Will Be Surprised To See The Transformation Of Your Favorite Actress From Alpha Bravo Charlie

Well, everyone is looking forward to the coming Sunday following the first episode release of “Ehd e Wafa”. The massive hype created and the alignment of actors as per the role is very well-received by the audience. Till now, the teasers only are being lauded by the digital awaam and good wishes have also started pouring in. This is definitely going to be BIG!

What do you think of the drama series? Let us know in the comments below!

Tecno Appoints Airlink As New Distributor To Enhance Availability Of Its Smartphones Across The Country!
PTA Issues Notice To Zong For ‘Misleading’ 5G Advertisement
To Top