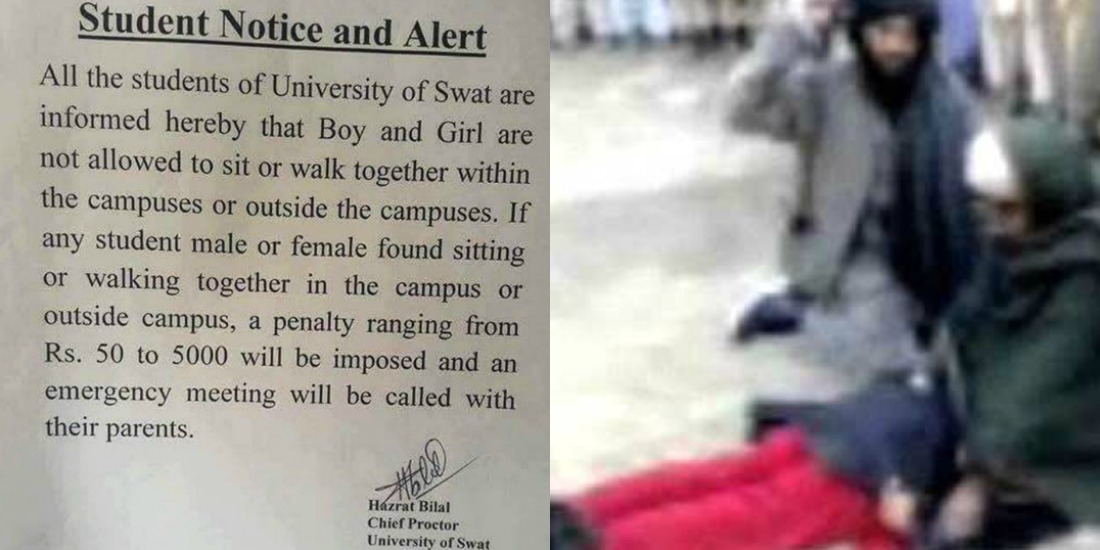 While the world is in search to discover life on planets other than Earth, a notification was lodged in the campus of Swat University, a co-education curriculum, that students will have to pay numerous fines if girls and boys were either seen sitting or walking together on or off campus.

It is pertinent to add here that Swat University is one of Khyber Pakhtunkhwa‘s most famous institutes. The campus, which is situated in Saidu Sharif, has openly notified students to not mingle with the opposite sex and stay away from each other, otherwise they’ll have to bare fines. As astonishing as this notification is, it is not funny – however, what’s funny is that it was notified by a proctor named Hazrat Bilal. Unbelievable!

Swat Valley, which is said to be nicknamed as ‘Little Europe’ for its beauty, is far from its name when it comes to gender equality and progress in a free, or slightly liberal society. If the educationalists of the university are going to preach such medieval policies then why are the locals of these distant areas blamed for their backwardness?

Previously, In 2009, a video had surfaced on media and the internet where a 17-year-old girl was flogged in public, for indecent behavior, by the Taliban. 7 years later, it’s the people who are responsible for building the society and popular public opinion, preaching similar policies.  Shameful, to say the least.

It is a high point where people of these distant tribal areas need to think and ponder hard, where their women stand. Are their women only alive to be baby-making-machines? While the Mullahs come home and devour cricket teams out of their wives? What ever happened to the fundamental rights of women that the 1973 constitution of Pakistan clearly states? Or are the women of these tribal areas not part of this country?

Since this notification surfaced and was highly criticized by students from all over the country, the Vice-Chancellor of the Swat University has taken action and the Chief Proctor has been suspended for gender segregation. However, the sad episode has left a huge scar on the minds of young students in Swat and other tribal areas.