Rato Dero - Pakistan's City Which Has About 900 HIV Positive Children!

With the advancement of time, humans are enduring more newly generated diseases which never existed before. Unfortunately, an average life span of humans is getting smaller with each passing era coming when least expected. Apparently, the unsterilized medical equipment and doctors’ inhumanity caused 900 children with HIV disease in Pakistan’s Rato Dero city.

Human Immunodeficiency Virus (HIV) lies among the world’s deadliest diseases and the numbers of the affected are continuing to multiply. With time, the human mind has discovered the cure to nearly every disease but still, many lose their lives every day. Recently, the small subdivided city of Pakistan, Rato Dero shocked everyone after its 900 children were tested HIV positive. According to reports, an HIV epidemic affecting children had been reported in the region since last April. Earlier this year, an uncontrollable wave of HIV positive patients came in and the hospitals were flooded with such cases. Unfortunately, the majority of the cases reported were of children which made the parents of the city extremely frantic.

Most of the children with HIV were under 15 years of age!

Soon after the disease nearly affected every house of the town, the diagnosis turned out to be severely devastating. The majority of the cases reported were of children enduring life taking HIV disease. From April, more than a thousand HIV patients have been registered in different hospitals including 900 minor children. Particularly, more than 800 out of 900 children are under 15 years of age.

As it has now become a concerned area for the world media, several revelations have come in sight. As per the Health officials investigating the widespread disease, the number of people affected might be much higher as a portion of the residents has been tested until now. Apparently, the government hospitals’ rotten conditions is also a reason behind the injection of such disease.

Unavailability of proper medication and non-degree doctors running their clinics in Sindh, Rato Dero is equipped with such. During the official investigation, it was discovered that the reason for spreading HIV is the repetition of a single syringe. Apparently, the cause is said to be the pediatrician operating in the city and reusing the same syringe on several patients. In Rato Dero, an unlicensed doctor named Muzaffar Ghangro is being the target of criticism for the public. Reportedly, the doctor was reusing syringes on his patients which lead to the HIV positive chaos in the city. Famous for being the cheapest in the city, Dr.Ghangro charged a minimal fee of Rs.20 as his patients belonged to an extremely poor background.

The heart-rending situation of a poor father!

During the investigation, an affected local Imtiaz Jalbani who is a laborer by profession also spilled some beans on the matter. He stated that Dr.Ghangro treated his all six children, two of whom died later. Unfortunately, the reuse of syringes took the lives of two of his youngest daughters, 14-months-old and 3-years-old, respectively. 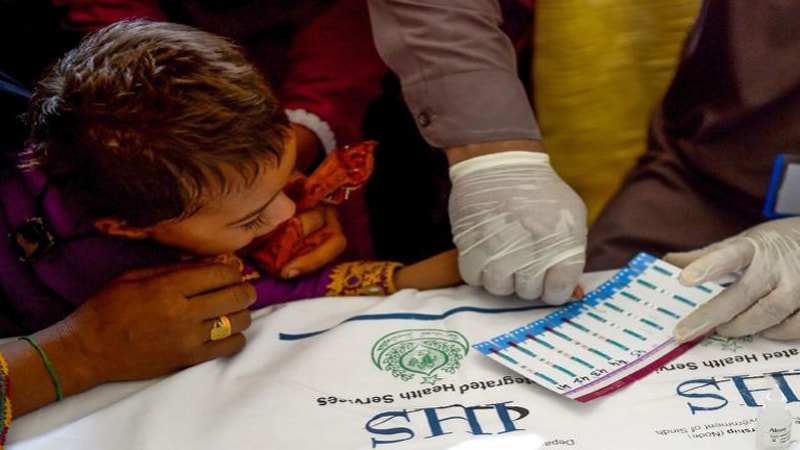 Fortunately, the incumbent Pakistan Tehreek e Insaf (PTI) government took action against the severe issue and apparently, not only Rato Dero but many other hospitals in the country were following the same practice. Keeping the HIV disease narrative in mind, many unregistered hospitals/clinics and unauthorized blood banks were ordered to seal by the government.

What do you think of the matter? Let us know in the comments section below!

Cyclone Kyarr To Stay Severe Till 1st Of November, But Karachi’s Safe!
Hollywood’s ‘Joker’ Tops As The Highest-Grossing R-Rated Film Ever!
To Top