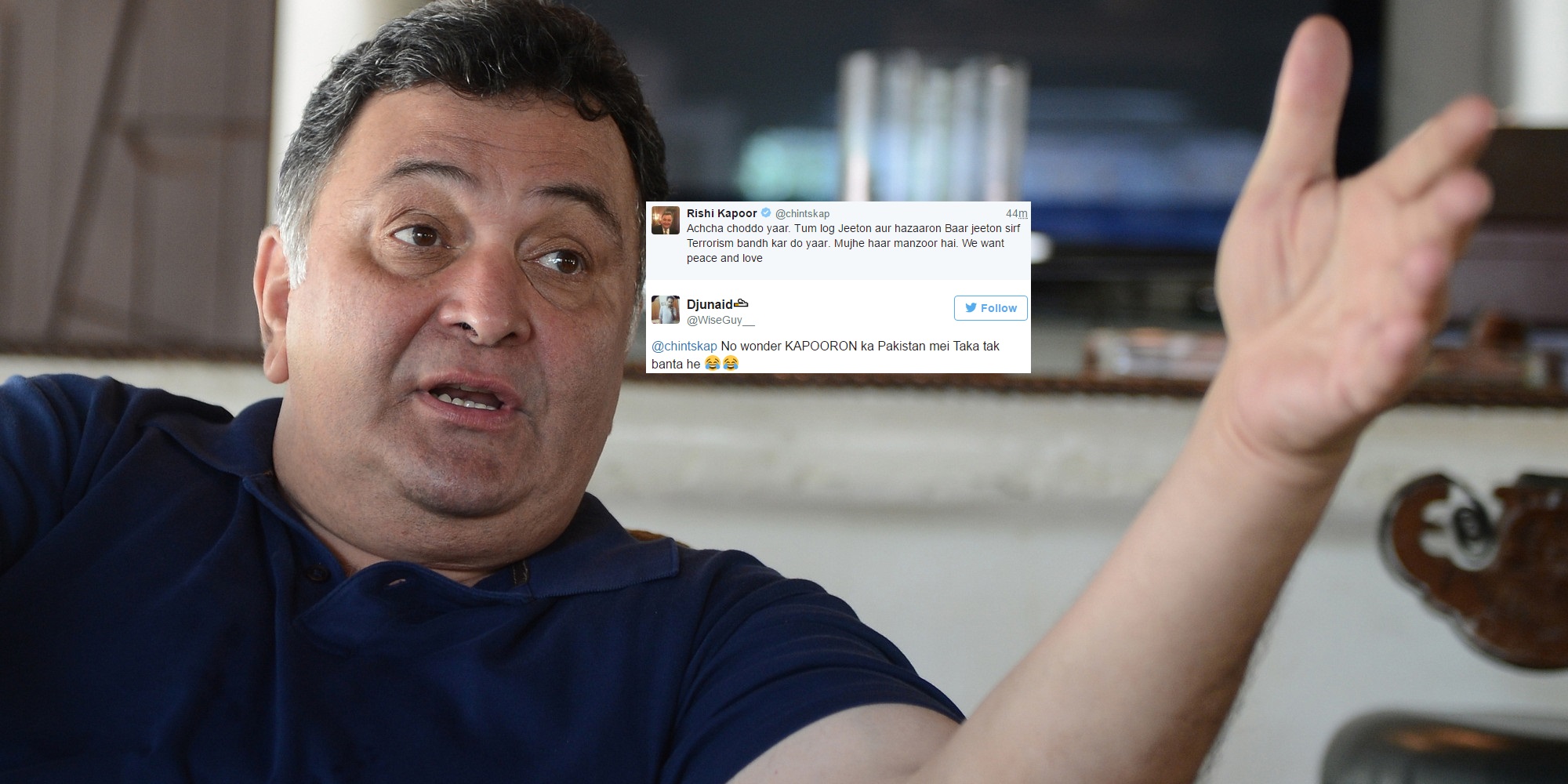 In the turn of events, who knew Pakistan would reach the final of this year’s Champions Trophy? Not surprisingly though, the entire Twitter India-Pakistan space went berserk as soon as India defeated Bangladesh and made a place in the finals. While India was already the favorites, Pakistan came out of nowhere and surprised everyone.

While these countries are arch rivals for decades, the shared history, and hatred present among the masses is unreal. It makes sense how the locals continue hating one another, but what makes it even more surprising is how the public figures use their social spaces to take digs on the rivals, setting such awful examples.

You won’t be reading this for the first time that one of India’s “senior” most actor Rishi Kapoor, in all immaturity, mocked Pakistan.

He Made This Tweet Last Night When Pakistan Qualified To Finals

Congratulations Pakistan! You enter finals? Wow! Good to see you wearing our colour BLUE! Get ready to be BLUED now! We will BLUE you away!

But Pakistanis Knew How To Give Shut Up Call

Sir, given your age, you are officially color blind now https://t.co/El366TVor6

With India Qualifying To The Finals, Rishi Kapoor Started Another Beef

And Again, Pakistanis Gave Him Some Excellent Replies!

Our Local Twitterati Hero Murtaza Ali Gave A Solid Response To Rishi Kapoor To Which The Actor, With His Lameness Intact, Responded

And Our Boy RTA Took Over! 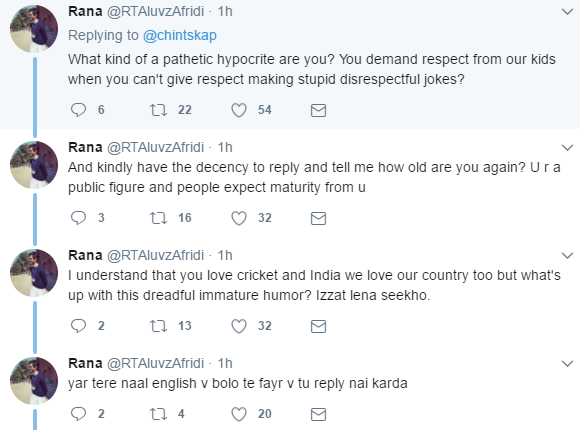 Lol i am not an illiterate dumbfuck like you who is not capable of understanding english.Angrezon sey azadi le li par ab bhi unkay ghulam ho https://t.co/UZM2EJ4gkr

HAHAHAHAHA WHAT IS THIS!

Sir, being a septuagenarian, its natural to have antediluvian thoughts but it makes you superannuated. https://t.co/5cOtUAApCf

Oh And You Thought Rishi Kapoor Was The Only One? Just Look At Sehwag’s Tweet!

We can see the level of decency in both legends of their respective countries. tch. tch. tch.#PakvInd #CT17 pic.twitter.com/NjGCYsFotz

Seeing How Pakistanis Were In His Mentions, The Actor Thought Of Running Away In Yet Another Poor, Immature Manner!

In All Seriousness, THIS!

Banter is one thing, but stooping to the lowest level as a public figure who people follow and preach all over the world is another thing. With the likes of Rishi Kapoor and Virendar Sehwag, such awful tweets ignite hatred, which is something we need to remove from both nations.

Anyway, 18th June 2017 will surely be a huge deal and all hell will break loose. Why? Because Pakistan will (InshaAllah) show who the baap really is!

Pakistan and India are in the Finals and Here’s How Pakistanis are Reacting!
Aamir Sohail Levels Shocking Criticism on Sarfraz Ahmed and Pakistanis Are Not Happy!
To Top