Basic Rights of Husbands in Islam According to Quran and Sunnah|Parhlo.com

Indeed, We offered the Trust to the heavens and the earth and the mountains, and they declined to bear it and feared it; but man [undertook to] bear it. Indeed, he was unjust and ignorant. [It was] so that Allah may punish the hypocrite men and women and the men and women who associate others with Him and that Allah may accept repentance from the believing men and be believing women. And ever is Allah Forgiving and Merciful – [Quran 33:72-73]

We often talk about the rights of wives on the Muslim husbands in accordance with Islam and encourage couples to follow them. Practising these rights leads to a healthy marriage, which further proves vital in a healthy family as well. The parents are the role-models for their family and essentially, children from their parents the most.

Husbands, in accordance with Islam, have certain rights over their wives. It is indeed important for wives to follow their rights and husbands to follow theirs, for it leads to a happy, healthy relationship. 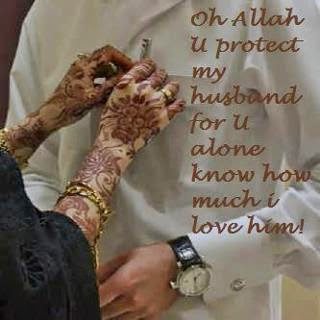 Following are the rights husbands have on their wives:

1. Keeping a Good Behavior with the Husband

“The best of your women is the prolific, the affectionate, the chaste, the endeared of her family, the humble to her husband, fortified against other than him, listen to what he says, and obeys his orders, offers herself to him when alone, but not in an unabashed manner like his.”

The importance of a wife’s good behavior can be seen from the following incident:

A man said to the Messenger of Allah (SAWW): “I have a wife who welcomes me at the door when I enter the house and sees me off when I leave. When she sees me grieved, asks me: what are you grieved for? If you are anxious about your livelihood, it is guaranteed by other than you; or if you are worried about your hereafter life, may Allah increase your worries.” The Messenger of Allah (s.a.w.) said: “Allah has agents and she is one of them. She will get half a martyr’s reward.”

2. Sexual Fulfilment of the Husband

Imam Al-Sadiq (AS) narrated the incident by the Prophet Muhammad (SAWW) when a woman asked the Prophet what meant by “putting off the husband”. The Prophet replied: “She is the woman who, when her husband calls her for some need, keeps putting it off until he falls asleep. Such a woman will, then, continuously be cursed by the angels until her husband wakes up.” (Bukhari).

“Any woman who dies while her husband is pleased with her, she will enter Jannah.” (At-Tirmidhi)

Unless a wife is unwell and cannot carry the act of sexual intercourse, she is obliged by the Almighty to fulfill the sexual demands of her husband.

3. Giving Husband the Authority and Obey him

The following two religious quotes prove the importance of giving the husband the upper hand in a family and the need of obeying him:

“Men are the maintainers of women, because Allah has made same of them excel others, and because they spend out of their property (for the support of women.)” Holy Qur’an (4:34)

A tradition of the Messenger of Allah (SAWW) says: “She may not go out of her house without his consent and should obey his orders.”

It is important for a man to protect his wife and his family and be the provider of them. This does not indicate how a woman is not allowed to earn but shows how she needs the permission of her husband.

All of the rights indicate how a wife needs to understand certain aspects and fulfill them. However, this does not mean the husband abuses them and forgets his duties towards the wife and the family.