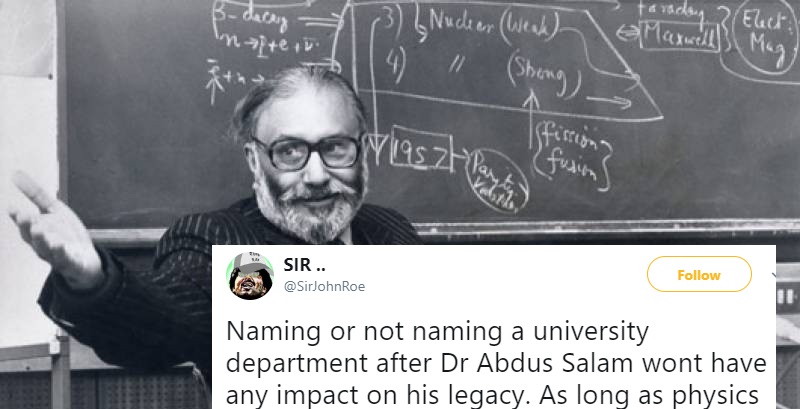 PMLN lawmaker Captain Muhammad Safdar announced on Thursday that the National Assembly has passed the resolution of removing the name of Abdus Salam from Quaid-e-Azam University’s Professor Abdus Salam Centre for Physics; and changing the name to Al-Khazini Department.

The entire action was taken with respect to the religious beliefs of Pakistan’s first Nobel Prize winner Professor Abdus Salam, who hailed from the minority in Pakistan – from the Ahmadi community.

According to Capt Safdar, Here’s the Reason Of the Change in the Name of QAU’s Physics Department:

In 2016, the Physics Centre was named after Abdus Salam by Prime Minister Nawaz Sharif, who also approved the name of the fellowship programme called the Professor Abdus Salam Fellowship.

The newest name of the Physics Centre will be Al-Khazini Department, dedicated to the Byzantine-origin astronomer Abu Al-Fath Abd Al-Rahman Mansur Al-Khazini.

Pakistanis reacted to the NA’s Passing In the Following Way:

Naming or not naming a university department after Dr Abdus Salam wont have any impact on his legacy. As long as physics exists, his name will forever exist. pic.twitter.com/LAJPAT2Jui

in light of recent events (parliamentarians voting to remove Abdus Salam's name from QAU's centre) i would like to reshare this. there is no place for good men in our "land of the pure". no wonder our national heroes revolve around the likes of Mumtaz Qadri. what a tragedy. pic.twitter.com/eJTgrS6Hxo

What chance does a nation stand when it considers jihadist terrorists like Lashkar-e-Taiba/Jamaat-ud-Dawa chief Hafiz Saeed (left) as educationists and disowns its only Nobel laureate, physicist Prof Dr Abdus Salam (right) because of his faith… #DrAbdusSalam #Ahmadiyya pic.twitter.com/zuq5Caq1J9

Why are we Pakistanis enemy of knowledge?

This is how Pakistan honors its heroes. Shame. National assembly passes resolution to drop the name of #Pakistan's first Nobel laureate #AbdusSalam from Quaid-e-Azam University's Physics Dept because he hailed from #Ahmadiyya community. pic.twitter.com/Pk5xQ3Tata

The reaction of many Pakistanis revolves around how the name should have not been removed and that Ahmadi community still belongs to the minorities of our country.

Many argued how religion should be kept aside from professional attributes and while Abdus Salam is recognized all over the world, Pakistan just discarded his contributions because of his religion.

The legacy and the work of Professor Abdus Salam continues to be honored and valued all over the world.

Abid Sher Ali’s Daughter Releases a Video To Support the Statements Made by her Father!
Pakistanis Seen Acting Like Maniacs At the New Islamabad Airport and It Is Absurd
To Top