While everyone is shocked at the suicide of one of the people’s favorite actor Sushant Singh, they can’t help but wonder what went through his mind that pushed him over the edge. As per people’s perception, taking his life would be the last thing to expect from an achiever like him. Then what was the reason that had set him off so much?

As many mouths, like many stories, but the real probable reasons that have surfaced from what his friends and family have shared, are as following:

Sushant Had No Real Friends In The Industry

Sapna Bhavnani revealed in her tweet that everyone in the industry knew he was doing through a tough time but nobody bothered to stand up for him and now everyone from Salman Khan to Karan Johar, is tweeting about him.

Only if people realized where Sushant’s thoughts were headed and listened to him, maybe he could’ve been pulled back to life. Unfortunately, people did realize but only after it was too late.

“To tweet today is the biggest display of how shallow the industry really is,” says Sapna.

It’s no secret Sushant was going through very tough times for the last few years. No one in the industry stood up for him nor did they lend a helping hand. To tweet today is the biggest display of how shallow the industry really is. No one here is your friend. RIP ✨ pic.twitter.com/923qAM5DkD

This does sound familiar, doesn’t it? We all know someone who is going through depression but we consistently ignore their cry for help and carry on with our lives. And once their gone, we put up statuses like we did our best to save them.

Felt A Void In His Life Of His Mother

Sushant was not that active on social media but the last Instagram post that Sushant Singh posted was about his mother and the heartfelt caption said it all.

Blurred past evaporating from teardrops Unending dreams carving an arc of smile And a fleeting life, negotiating between the two… #माँ ❤️

In an interview, Sushant expressed that he missed his mother and he would’ve been a different person if his mother was alive, “It’s not that I miss her only when something good or bad happens to me. I wouldn’t lie but I am not incessantly thinking of her, I wish she was alive to see me succeed in life, I am sure she would have been really happy and proud of me. And maybe I would have been a different person than I am now. The way I looked at things then and now, they are very different and I cannot go back to doing that.”

He also mentioned that his mother used to pamper him a lot and her love for him was unconditional.

Arjun Kapoor who also suffered the loss of his mother in the same year said that he had seen Sushant grieving for his mother in his success.

18 months ago… My last msg to him was when he posted about his mom a week after the release of Kedarnath. He was missing her I assume while the movie was being celebrated. I didn’t know him well enough though our paths crossed at yrf, events & screenings every now & then. I can’t say I understood what made him make this choice. I can say I felt the pain he did about losing his bearings & feeling that void of his mother. I hope ur in a better & happier space my friend. I hope u have found ur peace. We will all wonder & try & make sense of what happened today. I just hope & pray that when the circus settles down we as a society in due course realise ur choice wasn’t driven by one singular moment or thing but a culmination of so much that defines a human being not just by the profession u were in. Rest my dear brother Sushant you are now I hope at peace.

Just a week prior to Sushant’s suicide he had expressed his condolences to the grieving family of his manager Disha. She had also committed suicide by jumping off a building. He termed it as “devastating news” and a week later he decided to take his life too. 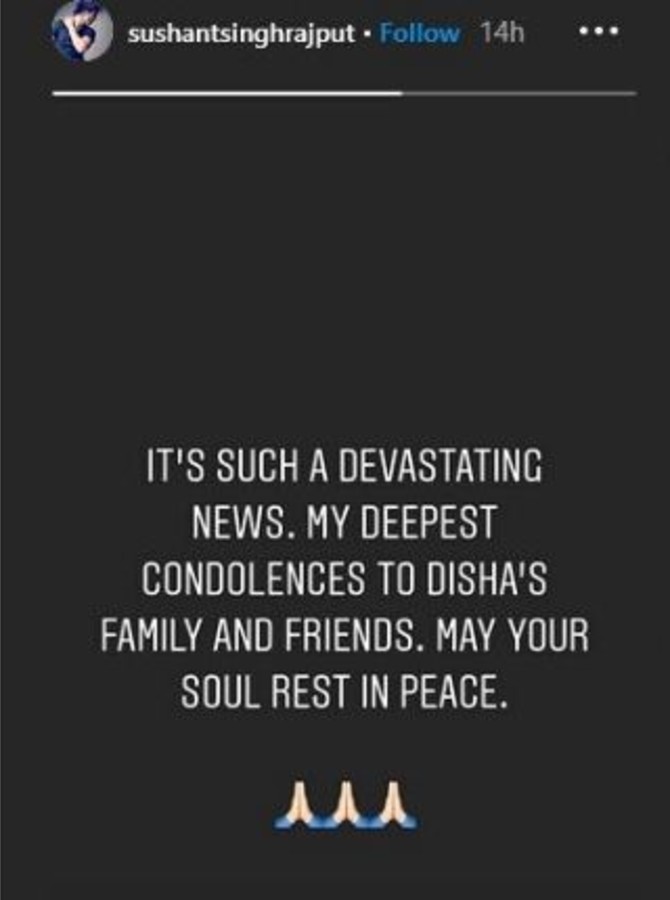 There is no clear evidence yet to link the death of the two but from what’s being anticipated his already inclining depression probably hit rock bottom after someone close took her life. Rumors are saying all sorts of things.

A few days before Sushant committed suicide, his ex-girlfriend Ankita Lokhande who he had dated for almost six years had gotten engaged to Vicky Jain. Both parted ways in 2016 and Ankita had tweeted, “Don’t feel alone I m always there in your heart, in your life,” after officially confirming the separation.

Considering how close Sushant Singh was to Ankita this could have been the final heartbreak for him. However, this news has shocked Ankita as much as anyone else.

Despite that the family of Sushant Singh is denying the suicide and calling it a murder, the fact that he had been taking medications for depression for the past 6 months verifies that his mental health was not so well.

Have anything to add to the story? Let us know in the comments.