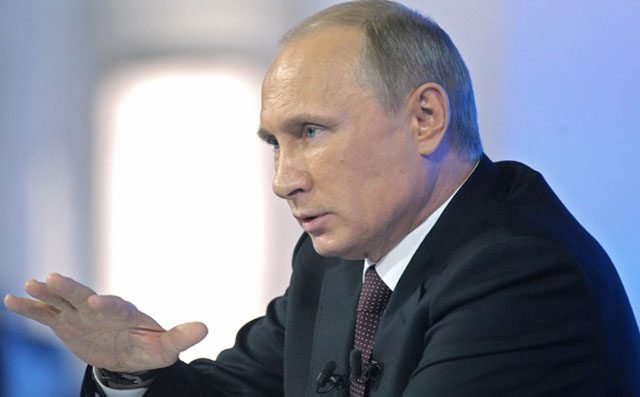 Russia sees no reason why its relationship with the West canâ€™t normalize, President Putin said amid growing tension between the opposing camps over the ongoing political crisis in Ukraine.

â€œYou know, it doesnâ€™t depend on us, or rather on us alone. It depends on our partners. I believe there is nothing hindering normalization and normal cooperation,â€ the Russian president told Rossiya channelâ€™s news show â€œSergey Brilevâ€™s News on Saturdayâ€.

Vladimir Putin added that he is on good terms with former Norwegian Prime Minister Jens Stoltenberg, who was selected to replace NATO’s Secretary General Anders Fogh Rasmussen in October.

â€œHe is a very serious and responsible man. Weâ€™ll see how the relationship will develop in his new capacity,â€ Putin said, according to a pre-broadcast transcript of the interview cited by news agencies.

The comments came after interviewer, Brilev, asked Putin whether he and Stoltenberg had had any incidents in the past similar to Rasmussenâ€™s taping of a private conversation with Putin. The Russian president shared his memories of the episode on Thursday during his annual Q&A session on TV.

While NATO initially said nothing of the kind ever happened, it was revealed later that the taping actually took place in 2002, as recounted by documentary filmmaker Christoffer Guldbrandsen, who directed a film on Rasmussen.

In the Saturday interview Putin discussed the presence of Russian troops in Crimea, which he confirmed earlier on Thursday. The troops provided security as the peninsula was voting in a referendum to split from Ukraine and join Russia.

He also dismissed allegations that the vote took place at gunpoint, as critics of the referendum claim.

â€œSpeaking honestly and objectively, it is clear that nobody can force all the people out of their homes at gunpoint and force them to go to polling stations and vote. But the turnout was 87 percent,â€ Putin pointed out.

The Russian president also rejected comparisons between the attempts of the Ukrainian authorities in Kiev to suppress protests in eastern Ukraine with Russiaâ€™s own campaigns in the turbulent south of the country in the 2000s.

â€œThe difference is immense. We were facing an aggression of international terrorist forces in the Northern Caucasus. Those were in fact organized well-trained gangs, which received foreign support and arms. Thatâ€™s a big difference,â€ Putin stressed.

Putin reiterated his calls to European buyers of Russian natural gas to help Ukraine with its gas debt to Russia. He stressed that the May deadline, after which Gazprom would stop supplying gas to Ukraine, unless it is pre-paid, has nothing to do with the scheduled presidential election in Ukraine.

â€œIt has nothing to do with the election. We donâ€™t link economics with the political process in Ukraine. On April 7 we were just supposed to receive the money owed for gas supplied in April. And we waited in vain for that $525 million. Zero. Despite it being the lowest price with all discounts applied,â€ he said.