There are various questions one has within their lifetime. Some end up answered while some remain as a mystery because people are too lazy to search the answer up. And one of such questions includes the concern of why most of the ships tend to be painted red on the bottom.

Basically, people have been noticing that every single ship that rests ashore has the bottom portion of it painted in red. Is it for the sake of it? Or maybe because it just looks good? There are several other reasons rather than the generic ones. The above two questions can definitely be counted as the causes of why the sea vessels are colored red, but it goes a bit deeper than that.

When a ship is within the waters, it experiences a variety of organisms like barnacles, weeds, plants, and worms sticking on the bottom of it. Such organisms have the capability to ruin the ship’s structure but also increase its usage of fuel. This is because the ship gets dragged a lot by the unnecessary baggage of the organisms. So it remains costly on the budget set for the ship. Not only do you need to pay to retain the physical structure of the vessel but you also have to pay for more fuel. 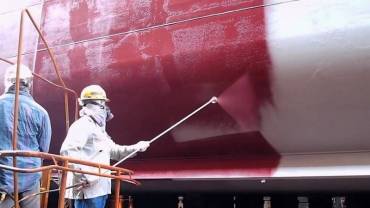 The Mechanism Of How Anti-foul Paint Works:

How does painting it red help? Well, the color red has copper in it which is an anti-fouling agent. It lures off the above things to rid the ship of any time-consuming hindrances. This is why using any other normal paint is a no-go. The thing is, copper can be within any color at this point considering how the times have changed. But red appears to be set as a ‘tradition’. Ships have been identified with this color so it becomes a part of their being. A ship without a red bottom simply looks out of place.

However, the color red remains shocking and visible as well. So if the ship is stuck in the middle of the ocean, a helicopter can easily detect it because of the color. Also, red in itself compliments well with the sea and helps outside sources in identifying the ship from afar. For example, people that are usually isolated on islands try to capture the attention of the passing-by helicopters through writing on the sand. It is a similar case for these huge ships as well. They can appear tiny from afar but the color red can easily be captured by the people above; as, red blends well with the waves and contrast of the ocean or sea.

Read Also: Here Is What You Need To Know About The Three Largest Cruise Ships In The World

What do you think of the situation? Do you think that that it is fascinating that even the smallest of actions are actually done for specific purposes? Or does that seem obvious enough? Share your thoughts through the links provided below.

A Policeman In Islamabad Was Involved In A Child Pornography Racket And Ye Kaisay Muhafiz Hain Hamaray?
A Young Student From KPK, Asif, Committed Suicide After Scoring Poorly In ETEA Test And It’s Tragic!
To Top