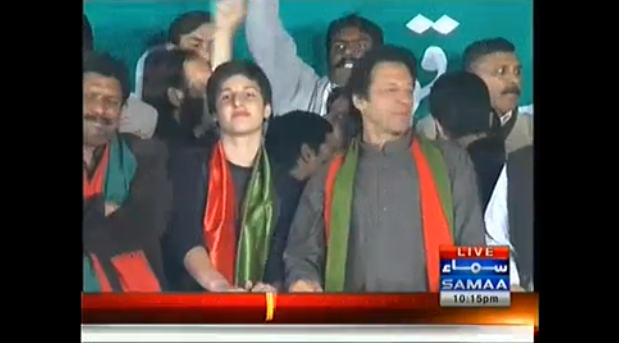 With the rising trend of politicians introducing their children to politics, Imran Khan also decided to take his sons to the Azadi March/ Dharna. Both sons of Imran Khan, Sulaiman Khan and Qasim Khan joined the PTI dharna/ Azadi March on the 20th of October 2014. They also joined Imran Khan on the stage.

During the dharna, Imran Khan responded the current prime minister Mian Nawaz Sharif’s question of making a Naya KPK. He said that yes, Naya KPK can be easily seen.

While addressing Nawaz Sharif and the participants of PTI dharna, Imran Khan said that Pakistan Tehreek-e-Insaaf has transformed Police, got rid of political influence, constructed new garrisons, constructed Police Colleges for training purposes, decreased the overall crime rate in KPK, on the other hand, Gullu Butts are being employed in the Punjab police department.

Imran Khan also added that for the betterment of education in KPK, Pakistan Tehreek-e-Insaaf led government has introduced a standard curriculum all across KPK. During the Dharna, Imran Khan stressed on the point that poor students are given free books, teachers are given proper training, and a number of new schools have been constructed in KPK. Whereas, in Punjab nothing has changed. Imran Khan directly accused the PMLN and said that in KPK, Patwari’s will not be able to take bribe now. He told during the Dharna that committees have been made to stop crimes.

While talking about the progress in KPK during the Dharna, Imran Khan said that the tax collection has increased by 230%, which is never done even in Punjab. Imran Khan claimed that in KPK the public loans have been decreased by Rs 6 Billion, while the Punjab government has doubled the loans on all the Pakistanis.