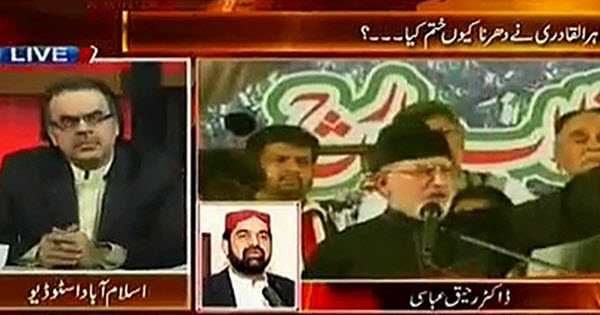 Rumors were widespread from some days that the chief of Pakistan Awami Tehreek (PAT), Dr. Tahir ul Qadri may call off the Dharna in Islamabad any time. Dr. Tahir ul Qadri was anticipated to announce it in his public meeting in Lahore, but for some mysterious reasons he deferred his decision.

Dr. Tahir ul Qadri said that he had envisioned a change of government but his Dharna has altered the mindset of the people of Pakistan. But, Dr. Tahir ul Qadri clarified that an end to Islamabad Dharna does not put an end to Pakistan Awami Tehreek (PAT)’s Inquilab movement.

Dr. Tahir ul Qadri said while elaborating on his decision: “Our movement will continue till the formation of a national government.”

On the Contrary, Dr. Arif Alvi, a senior leader of the famous political party Pakistan Tehreek-e-Insaf (PTI), said that his party’s Dharna will continue on the constitutional avenue of Islamabad. Dr. Arif Alvi said: “We are staying till the end.”

This video explains the real reason why Dr. Tahir ul Qadri ended his Dharna in Islamabad and his underlying motives. Dr. Shahid Masood securitizes each and every event and has come up with a theory. Did Dr. Tahir ul Qadri have a deal with the government or Imran Khan pressurized him to end the Dharna, find out in this video.

Misbah-ul-Haq Stuns the World, Right before Cricket World Cup 2015
Meet Monty: The Adorable Cat With An Unusual Face
To Top