As we celebrated Eid with our loved ones in peace, Pakistan’s brave soldiers didn’t. Instead of being with their families, they laid their lives for the soil somewhere far, far away.

Lieutenant Colonel Rashid Karim Baig embraced martyrdom in an IED Blast at Kharkamar area of North Waziristan. According to ISPR’s statements regarding the terrorist attack, an IED (improvised explosive device) was planted on a roadside to target military vehicle. 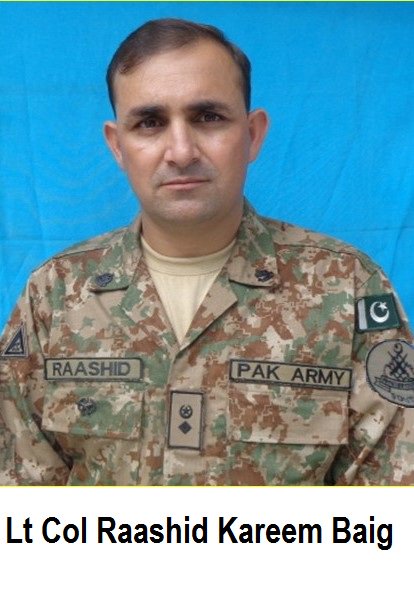 Kharkamar area is the same location where Army personnel were provoked and attacked by the PTM armed protestors. In the span of one month, several precious lives of our soldiers were lost. Statistics show 35 injured while 10 security army personnel were martyred.

Our Soldiers Leave Behind their young children, wives, and old parents- All that do grieve but proud to be associated with a shaheed. As Allah has given them the highest of ranks and promised them Jannah (Paradise).

Shaheed Lieutenant Colonel Rashid came home in a coffin to a grieving yet proud family in Hunza and was buried with complete military honors.

Rashid Shaheed was not alone, with him three others left this world. Major Moeez Maqsood Baig, resident of Karachi, Captain Arif Ullah, resident of Lakki Marwat and Lance Havaldar Zaheer, resident of Chakwal were martyred in the attack as well.

Deepest condolences to the families of military shaheeds, Lt Col Rashid Kareem Baig, Maj Moeez Maqsood Baig, Capt Arif Ullah, & Hav Zaheer Ahmad.They made the ultimate sacrifice to keep us safe. We pray for the departed souls and for recovery of those critically injured pic.twitter.com/TPGng1dWbD

Their sacrifice was not in vain and it is because of their devotion and loyalties to the country that its people live peacefully and sleep soundly. We salute all the departed soldiers and the ones still standing fiercely in the face of life-threatening situations.

Plastic Bags Should Be Banned Or Else Pakistan Will Be Doomed
Meet SHO Malik Jabbar — A Policeman Who Took Care Of Two Orphans After Their Mother Was Killed!
To Top