Ramiz Raja Asks Shoaib Malik if Sania Mirza is the Secret of his Fitness and It got Really Awkward!

Don’t know whether he does it on purpose or not, but sometimes, Ramiz Raja says statements which have sort of a double-meaning which the boggles the mind. The former cricketer and now a commentator is known for his witty remarks, but Pakistanis always notice the statements and use them in their own manner.

"It's not that thin. Still has a bit of bulge."

I have a feeling Ramiz takes the piss. He knows exactly what he's saying. #RamizPorn

Jokes aside, yesterday’s match was a big relief for Pakistani cricket fans. The game was in the hands of the Men in Green from the start. The astonishing performance from our youth players such as Hasan Ali and Babar Azam prove that the future of Pakistan cricket is in decent hands. Sarfaraz’s captaincy has also been regarded since the beginning of this series.

One of the Most Senior Players on the Team, Shoaib Malik, has Indeed Proved himself Vital for Pakistan

Malik gave a striking performance yesterday and scored 69 runs while remaining not out. 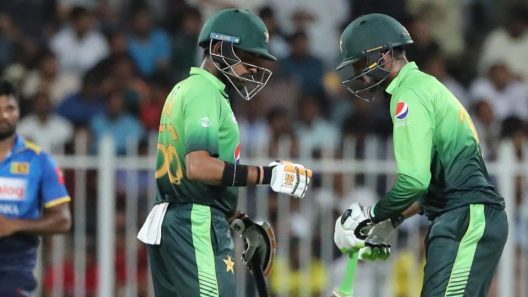 The post-match entertainment revolved Pakistani commentator interviewing Shoaib Malik and Waqar Younis. The commentator, in his own ‘witty’ manner, was straightforward and asked Malik some extremely entrapping questions but Malik handled them with sheer professionalism.

One can even say that the three men who have been associated with Pakistani cricket were just having some fun.

Malik laughed it off and answered it in his own manner, and Waqar Younis also gave credit to Malik for his performance in the yesterday’s match.

Malik shared how US Embassy asks such questions during the VISA interview. He then answered it well by sharing his desire to play the upcoming world cup in 2019.

On a Lighter Note, Younis Asked Malik his Secret of Being so Fit

They joked about how the wife may be the reason for being fit and Malik said, “Woh tou unfit hone ki waja hai.” But on a serious note, he shared that she is one of the reasons he is fit. Raja even asked how afraid is Malik of his wife.

And Ramiz Being Ramiz Here!

Here’s the Link to the Complete Interview:

Perhaps three Pakistani cricket fanatics just had some fun fooling around in a lighter manner. However, hinting that a player may be playing only for the sake of money felt wrong, given how Malik is performing well.

Pakistan is now leading the series against Sri Lanka with 4-0!