Each time we saw the former Chief of Army Staff Raheel Sharif was either when he was on duty or when he was making sure the enemies learned the lessons. Ever thought you’d see the guy dancing, let alone smiling? Guess that comes to reality now as well.

The Video of General Raheel Sharif Dancing with Fellow Officers and Soldiers Instantly Went Viral on the Social Media!

We weren’t the only ones who were thrilled – even the fellow officers and soldiers were surprised to see former COAS dancing on the Pashto song at the Frontier Force!

General Raheel Sharif dancing with officers and jawans on a Pashto song! This man is so adorable! ❤ pic.twitter.com/iguF62AMPx

Look at the smile on his face! 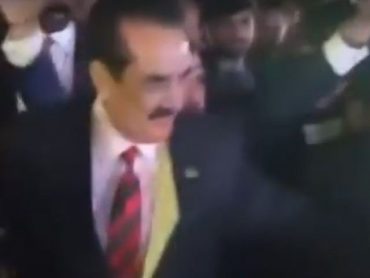 Retd. General #RaheelSharif exhibiting few dance moves with officers and jawans on a Pashto song during his visit to the Piffers mess in Abbottabad.
❤ #PakistanArmy #Pakistan pic.twitter.com/sakmCOjspO

Guess the army men of Pakistan are pretty good at hidden talents, don’t you think?

Great to see a new, fun side of a man who always painted a strict, serious image of himself throughout the tenure.

Shoaib Akhtar has a Cracking Reply to those Who Spread False Rumors of his Death on Social Media
This Guy Who Isn’t a Fan of Being Called as “Shah Rukh Khan’s Doppelganger” is Breaking the Internet!
To Top