Qandeel Baloch Did Not Deserve This Death Neither The Negative Response

A Multan-born, pseudo-Baloch model, Fouzia Ameer alias Qandeel Baloch who had hit the Pakistani social networks in the past year, was brutally murdered by her own brother in Multan.

Qandeel, who was famous for her vlogs (video blogs) through her Facebook page and her unconventional way of attracting attention and gaining publicity, was left for dead after apparently, her brother strangled her to death after a vicious beating. The reason for murder, as reported, is Qandeel’s denial of funding her brother with money for his drug inductions.

The Holy Prophet (PBUH) said: “A prostitute was forgiven by Allah (SWT), because, passing by, a panting dog near a well and seeing that dog was about to die of thirst, she took off her shoe and tied it with her head-scarf, she drew out some water from the well and gave it to the panting dog. Thus, Allah forgave her.”

If the Holy Prophet (PBUH) could give Allah (SWT)’s example of such forgiveness, who are we, the people to judge a woman on her acts and say that she deserved to die like this? She was unorthodox, her ways were unconventional, her ambitions were faulty but before we pass such cynical judgments of who deserves to die and who doesn’t, one must surely take a deep look inside their collar first.

Hazrat Imam Ali (R.A) said: “Every person who is tempted to go astray, does not deserve punishment.”

After Qandeel’s death, there was a post on social media that said: “We gave Qandeel Baloch the attention she never deserved. We gave her the fame she never needed. We brought her to where she was, had we not, she would’ve been alive today. We played a part in her murder!” And indeed, we did.

This is how some people reacted to Qandeel’s death, absolutely shameful!

Its the real HONOR KILLING. Probably something which was much needed to protect our ideology as a nation. Anyway RIP #QandeelBaloch #Multan

Someone's just hunted me down on Facebook to say Qandeel Baloch basically deserved to die because she's liberal. 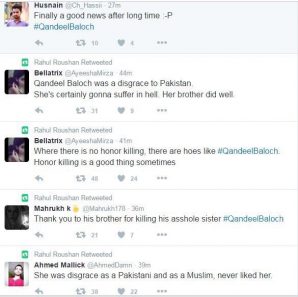 A Man Called the Punjab Police For Help. You Won’t Believe How They Responded
How Our Politicians Are Embarrassing us In Front of Others!
To Top