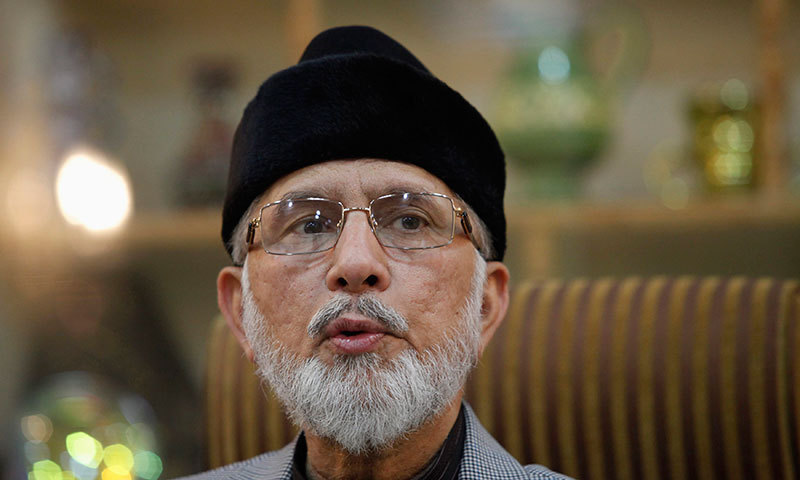 He said he was committed to bringing a revolution in Pakistan, adding that a People’s Revolutionary Council would be constituted shortly.

The PAT chief called upon people to stop obeying what he termed the illegitimate orders of the authorities.

He said government officials should be held accountable to the state, Constitution and the law, adding that they should not be loyal to rulers but to the system at large.

The PAT chief said salaries of police officials were given by the state and not by Raiwind, adding that this called for the force’s loyalty towards the state.

Qadri had returned to Pakistan in late June to lead what he called a revolution. He was scheduled to arrive in Islamabad but the government had ordered the diversion of the aircraft carrying him to Lahore.

Prior to his latest visit, Qadri had led a huge sit-in lasting over four days while the previous Pakistan Peoples Party (PPP) government was in power, four months before it lost the May 2013 general election to Nawaz Sharif’s party.

He had demanded the early dissolution of the PPP government and the implementation of a caretaker setup backed by the military and judiciary.

But despite intense media interest, the protest had little long-term impact â€“ Qadri ended his sit-in after talks with ministers and the election went ahead as planned.

Qadri is also the founding leader of Tehreek-i-Minhajul Quran (TMQ), an organisation with branches in more than 90 countries which works to promote peace and harmony between communities.

His sudden and apparently well-financed emergence last year after years living in Canada was seen by some analysts as a plot by sections of the establishment to delay the elections and regain power.

NSA spying on PPP is a violation of international law: FO
This Is What It Is Like When You Dive Into The World’s Biggest Cave! Unbeliveable ..
To Top