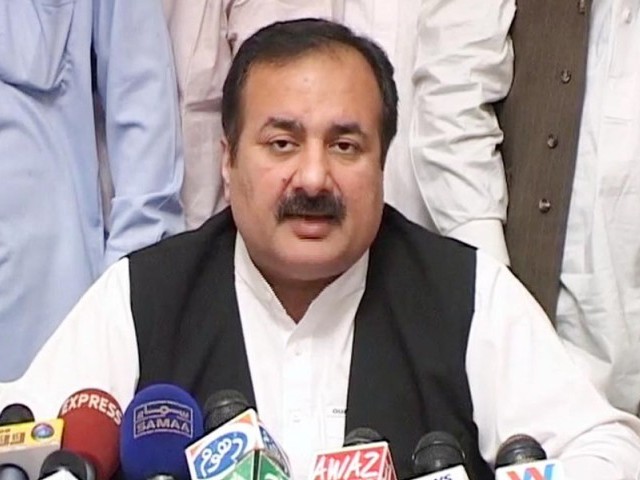 LAHORE: Without taking any names, Punjab Law Minister Rana Mashhood lashed out at opposition parties, claiming that they were cashing in on the tragic events such as the Model Town incident to gain the upper hand.

Speaking to the media in Lahore, Mashhood said that Pakistan Muslim League-Nawaz (PML-N) has not tried to cover anything up and an investigation into the tragedy – which claimed 14 lives and injured around 80 others – is underway.

The law minister stated that these parties should â€œstop playing politics over the dead,â€ adding that Pakistan cannot afford to keep suffering from bumps like this â€œon its journey to success and prosperityâ€.

He added that the country was losing out on investments because of such incidents. Turkey Prime Minister Recep Tayyip Erdoganâ€™s wife, who would have inaugurated projects and brought investments into the country, had cancelled her trip to Pakistan, he said.

Speaking about the May 2013 general elections, Mashhood said that Pakistanâ€™s citizens had used their votes to bring the current government to power and it should be respected.

Referring to opposition partiesâ€™ claims that the elections were rigged, Mashhood said â€œthey are putting a question mark on the whole system in order to fulfill a small purpose.â€

Also Read: I will resign if held responsible for Lahore incident: Shahbaz Sharif

Pakistan Tehreek-e-Insaf (PTI) Chairperson Imran Khan has on many occasions claimed that the elections were massively rigged, alleging that returning officers had played their part in manipulating results.

Mashhood, in response to this accusation, said returning officers were session judges who have been part of the system for a very long time and that their credibility was not questionable.

â€œThey work independently,â€ he said, adding that they are not anyoneâ€™s employees.

â€œThe country isnâ€™t buying what you are saying a year after the elections,â€ Mashhood said, referring to Imranâ€™s allegations.

10 things you can do on the Night of Power (Ramadan)
Suleman Lashari murder case: Medical board declares suspect Salman Abro a minor
To Top