The internet is never forgiving – once something goes on the cyberspace, the internet never forgives, nor forgets. Amidst this entire Imran Khan-Ayesha Gulalai fiasco lies another controversial aspect which was revealed by the spokesperson of PTI Naeem Ul Haq.

Quick recap though – MNA Ayesha Gulalai ended her ties with PTI after claiming that she was harassed by Imran Khan. On the other hand, PTI workers have claimed that Gulalai’s attendance was low in the assembly, due to which Khan rejected her plea for the ticket. This lead to Gulalai leaving the party and throwing a fit. Gulalai, however, has been stating that she was not only harassed but was also never given the seat she deserved.

The part where Gulalai claimed to be harassed by Khan in her words took place in 2013 when Khan sent “nasty” messages to her. Gulalai was then asked to share the messages and so far, she hasn’t done anything as such. Keeping this entire frenzy in mind, PTI’s spokesperson Naeem Ul Haq made two tweets, sharing how he “discussed” marriage with Gulalai.

You Will Not Find These Tweets on Twitter because Naeem Ul Haq Deleted Them, But As Mentioned Earlier – Internet is Never Forgiving! 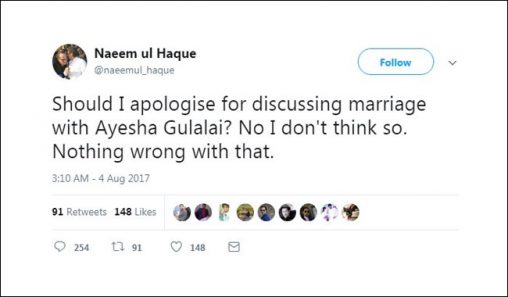 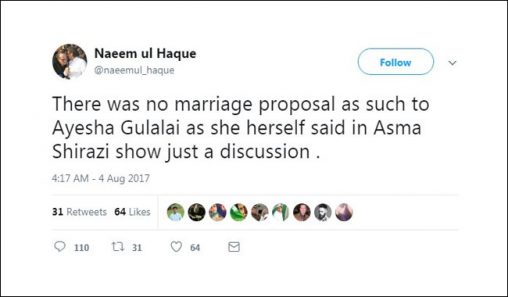 The Internet Reacted to Haq’s Tweets As Well!

Naeem ul Haq should be arrested solely because she proposed a woman on a text message. Fucking idiot

….But He is the Spokesperson…

Naeem ul Haq can be a better spokes person of Imran Khan IF HE KEEPS HIS MOUTH SHUT.

Imran Khan and Naeemulhaq were proposing Ayesha Gulalai at the same time. Party or matrimonial service?

Wow the tweet is deleted by Naeem Ul Haq but I am sure he knows once something goes online, it stays online FOREVER! pic.twitter.com/qRjG6Yo9He

On the Other Hand, According to PTI’s Shafqat Mehmood, Haq’s Account Was Hacked

Just spoke to Naeem ul Haq. He told me his twitter account has been hacked and false tweets regarding Ayesha Gulalai posted in his name

This wasn’t the first time Haq was said to be involved with a party co-worker – officials claimed that Haq harassed Zahra Shahid.

Regardless though, we all had a great morning reading Naeem Ul Haq’s tweet. This entire fiasco, regardless of how one may think about it, is getting funnier!

Let the Battles Begin – PTCL Goes Savage Again and Started a Brand War on Twitter!
I Contacted This Indian Girl For A College Project, Didn’t Know She Will Leave Us So Soon
To Top