One of the biggest cricket events of Pakistan, Pakistan Super League will commence from February 20. Though the fans are excited to witness the mega event but with great pleasure comes great inconvenience. During the PSL,  traffic in Karachi is going to be a huge problem.

The matches in the National Stadium Karachi will be played on February 20 to 23 and March 12 to 17. The traffic plan is out to facilitate the citizens during those days. Like always, few roads will be blocked and diversions will be made which will cause traffic jams and delays. 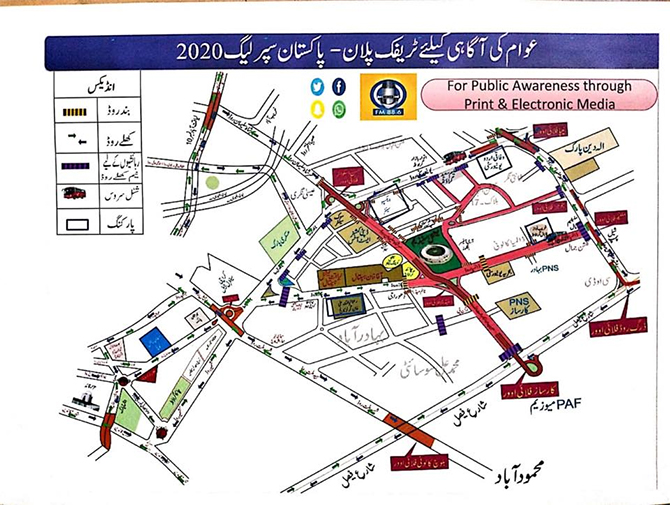 Heavy traffic will not be allowed from Sohrab Goth to Nipa, Liaquatabad No 10 to Hasan Square and Peoples Chowrangi towards University Road.

Traffic coming from Shahra-e-Faisal shall not be permitted to proceed towards the stadium. These vehicles will be diverted towards Drigh Road, Rashid Minhas Road, Millennium mall to NIPA. As most of the traffic comes from Sharea Faisal, closing down this route might cause inconvenience to the citizens.

From University Road, all kinds of traffic shall not be permitted to proceed to Stadium Road. Traffic will be diverted towards Jail, Shaheed-e-Millat or straight to PP Chowrangi.

In case of any inconvenience, people can dial Traffic Police

In case of any inconvenience, people can dial Traffic Police Helpline Rahnuma-1915, where traffic staff will be available to assist them.

Furthermore, this year’s PSL is bigger and better. The winner of PSL 5 will receive a cash prize of $500,000 while runner up will get $200,000. Many veteran cricketers will be honored during the tournament.

According to the statement, $80,000 will also be equally distributed to some of the star players of the event. Moreover, fans will be facilitated with ‘Fan Parks‘ in this year’s edition.

The six teams will play a 34-match tournament in different venues of Pakistan. The first match will be played between defending champions Quetta Gladiator to two-time winners Islamabad United. Traffic in Karachi is already a huge issue, with the PSL beginning, things are going to get tougher for Karachiites.