These Memorable Moments From The PSL 2018 Final Are Worth Reliving!

Great arrangements had been made throughout Karachi for the PSL final to look as berserk as it did. From the streets to the billboards, Karachi was ready for the final game. With Peshawar Zalmi batting first, the team’s middle-order soon collapsed, and the pressure was left on Wahab Riaz to make something off the match as he hit a few boundaries to make the total respectable in the final over. 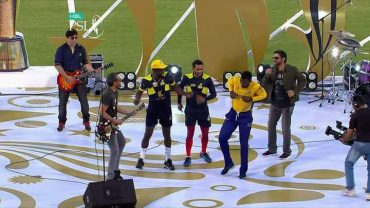 However, as Peshawar had feared all along, Luke Ronchi came into bat for Islamabd United, and slogged his way to a 50. In the end, it was youngster Asif Ali who finished the job for Islamabad United, making them the Champions for the second time. If you missed the match or didn’t binge, we’ve got a list of some of the best moments from the match, just for you!

When the crowd in Karachi showed IPL what the sports spirit is all about..

When Chris Jordan smacked a few around the ground for Zalmis..

When young Shadab took Sammy out, two times in a row with the doosra!

And then, Luke Ronchi came out to bat, and OMG the fireworks!!

The tournament gave us some of the best young talent from Pakistan!!

Yeah….
Good Bye PSL with a six..
Finds of this season
Hussain Talat
Sahibzada Farhan
Shaheen Shah
Asif Ali
Agha Salman
Most Probably all of these will get a chance against WI#IUvPZ

Kamral Akmal didn’t just drop the catch… but he also dropped the match!

And then.. Asif Ali killed off any chances of Peshawar Zalmi winning the match with a hattrick of sixes!

The celebrations that followed, will forever be remembered in Karachi. THE PSL FINAL WAS BOMB!!

And the best moment of the match, by far, Shadab and Hassan Ali fighting it out after the match. Friendship goalssss!

After so much hard work, dedication, and valor, all the stakeholders of the PSL franchise successfully concluded the tournament. Last but not the least, a huge round of applause for the fans who came to watch the match in Karachi. They are the real MVPs! PSL Zindabad, Pakistan Paindabad.

Recent Posts
Trending Posts
Urdu
Hasnain Lehri Recently Performed Umrah But People Are Busy Discussing Something Totally Different
Kamran Akmal Dropped The ‘Match’ In PSL Final And The Internet Did Not Spare Him For That!
To Top