Protests Erupt in US, European Cities Against Anti-Muslim Violence In Delhi

As the violence in Delhi against Muslims is not settling down, people around the globe are now standing in support of Muslims in India.

Hundreds of Indian-Americans of different faiths rallied outside Indian consulates in major American cities over the last weekend. They staged a protest against the recent violence in Delhi that has killed at least 40 people, and injured hundreds.

Moreover, demonstrations and sit-ins were also organised by members of the Indian community in more than 18 cities across Europe. They express solidarity with the victims of the clashes in Delhi and demand immediate action against those responsible. The protests were attended by around 1,500 people. It was held in different cities including Brussels, Geneva, Helsinki, Krakow, The Hague, Stockholm, Dublin, Paris, Berlin, Munich, Glasgow and London. 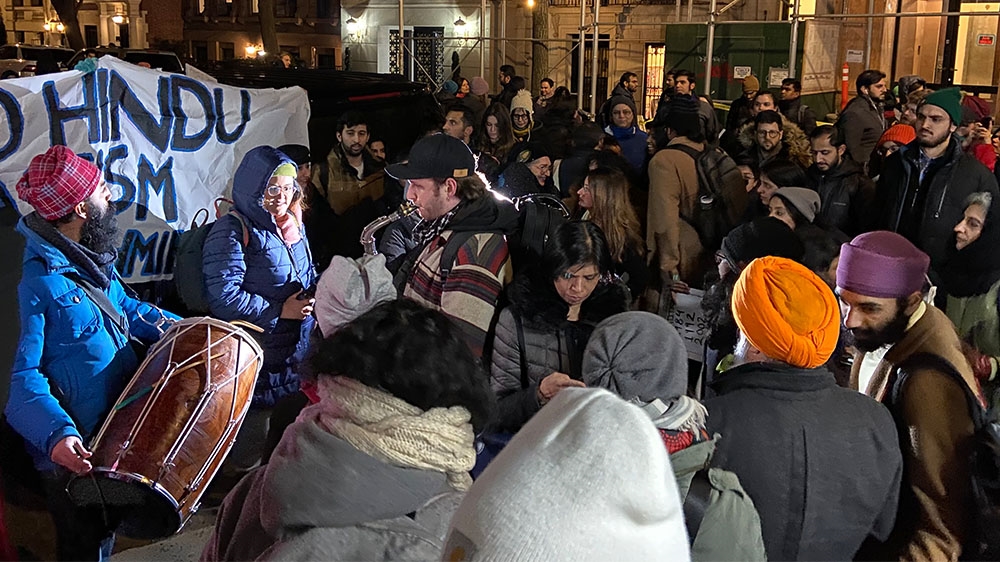 Protests around the world

In Berlin, the protesters marched towards the Indian embassy, raising slogans against the alleged police atrocities on the victims and inaction by the government.

In Belgium, the Indians carried out protests despite harsh weather conditions. On the other hand, the protestors in Krakow wore black to symbolize mourning and resistance.

A protest in Geneva today, against state callousness, wilful negligence, and in solidarity with those affected in #DelhiRiots pic.twitter.com/Hl4okm3K8c

The Netherland protests saw slogans in English and Hindi, poetry and speeches. In Paris, French citizens joined Indians to observe a minute of silence. They also laid white roses, a symbol of the anti-fascist resistance in Europe, near the consular office in Paris.

A large group of students, human rights activists and diaspora group representatives gathered outside Indian High Commission (HC) in London. They staged an emergency protest against the Citizenship Amendment Act and the associated violence in India.

Large gathering at protests in London despite being organized at short notice. The weather has not deterred us. We see your hate factory and the opression by your forces Modi & Shah #DelhiPogroms2020 #WorldAgainstDelhiViolence @zoo_bear @SAsiaSolidarity @SOASIndiaSoc @SASAF_UK pic.twitter.com/GHI2Jo0NLz

Furthermore, a petition has been filed in Indian Supreme Court by 10 people from Northeast Delhi who are victims of the ongoing clashes that rocked India. They have also sought  FIR against BJP leaders Kapil Mishra and others who gave hate speeches in Delhi to incite violence.

The petition on Delhi violence will be heard after two days. It has also sought exemplary compensation to all victims. Recently, an 85-year-0ld woman is burnt alive in her own house in Delhi. The incident has ragged many on the global level.

The last updated death toll in the violence was 42. Two Special Investigation Teams have also been constituted under the Crime Branch, Delhi Police, to investigate the violence. However, no effective results can be seen so far to end the violence on Muslims.

PML-N’s Abid Sher Ali Gets Called A ‘Thief’ During An Event In London!
Punjab Wildlife Dept Fails To Catch Man Behind Ongoing Raptor Killings!
To Top