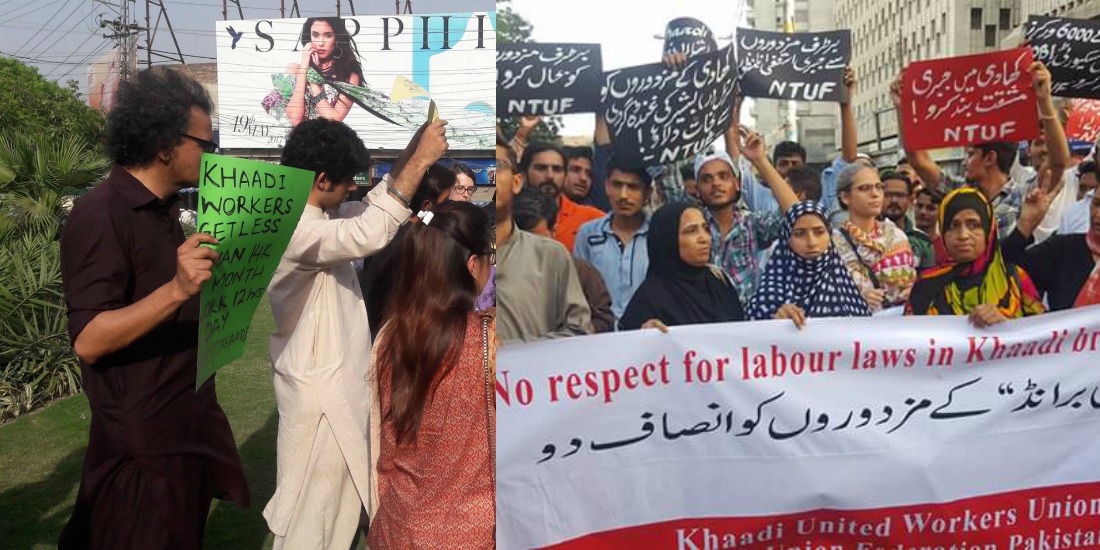 The month of Ramadan is just around the corner and people are busy gathering useful household and food items to stay at ease. Ramadan always become a huge challenge for everyone specially for working class during summer. For some employers, a demand of increased salaries during the month may seem to be a fair one. However, it looks like one of the clothing brands in Pakistan is not at all in agreement with that. That is why it allegedly unloaded the “burden”.

In a peaceful strike that occurred in Mini Market, Lahore, people displayed banners and slogans against a famous clothing brand that has allegedly sacked its workers due to demands of higher salaries. In a post published by People’s Solidarity Forum, the brand pays  PKR 14k a month for 12 hours a day. About 32 workers have been fired so far, reportedly.

In a tweet which is going viral on Twitter, a female worker revealed the working conditions of the organisation. As per the worker, there are very few or no unofficial leaves, not even sick leaves. Workers have been categorized as“temporary staff” for about two years despite the claims by higher management that they will receive their “permanent” status in a few weeks.

Working condition in #Khaadi. Factory gatewas closed for 32 workers. 124 more workers’ job is on risk as all were veryactive in unionization pic.twitter.com/wT6H4sFrrA

Not only this, after offloading 32 workers, 124 more workers have their jobs on risk as media tries to uncover the real story behind the brand’s spectacular lawn suits and prints.

Justice for #Khaadi workers who were fired in violation of labour laws. #ntuf @zehra1akhan pic.twitter.com/Cr7eHdQlMF

The brand has not released any public statement yet…

Justice for #Khaadi workers who were fired in violation of labour laws. #ntuf @zehra1akhan pic.twitter.com/Cr7eHdQlMF

Common Things You Do At Iftaar That Can Cause Death!
Dear Pakistanis, We Are Likely To Face A Ban On Beard Styling During Ramadan!
To Top