As per a news portal, a family living in Istanbul Fatih is protecting the holy cloak. The family has the cloak since the seventh century and the cloak is currently in a mosque in Turkey. 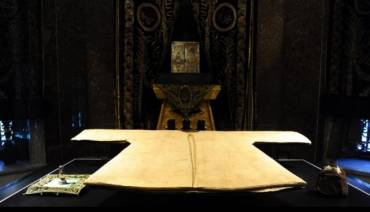 Reportedly, hundreds of people assemble at the door of a mosque in ancient Fatih district Istanbul in Ramadan.

Outside of the mosque, there are shopkeepers selling several types of dates and packed Zamzam water__ the holy water that comes out in the holy city of Makkah.

During the holy month of Ramadan, thousands of Muslims from around the globe visit the mosque. Primarily, Muslims go to the 160-year-old mosque to see the cloak of the Prophet Muhammad (SAW), which is known as ‘Hirka-i Sharif’.

“Every year, more than a million people visit the mosque during Ramadan. We had 20,000 visitors on a recent Sunday,” stated Sumeyra Guldal, General Secretary of the Hirka-i Sharif Mosque Foundation, who takes care of the worship place.

“In just three weeks we have more visitors than many of the other museums in Turkey,” Guldal told a news broadcaster.

Interestingly, the family that overviews the Hirka-i Sharif has the holy roots.

The family is safeguarding the cloak for 13 centuries, generation to generation.

Currently, Baris Samir is protecting the cloak he is the 59th descendant of Hazrat Owais Qarni (R.A). He said, “Since I was three or four years old, I have been at the mosque. I have seen how possessive my family has been about the cloak and also its willingness to allow people to visit it.”

“Ours is on a very honorable mission,” said Samir, a 45-year-old native of Istanbul, who is a mechanical engineer by vocation.”

“How many families in the world know their genealogy going back 59 generations?”

The story of Owais Qarni

Hazrat Owais Qarni (R.A) has a special status in Islam; his captivating story has influenced several Muslim scholars and Sufis. Intresteglinly, the Prophet Muhammad (SAW) and Hazrat Owais Qarni never met but their love is indescribable.

Hazrat Qarni (R.A) was the native of Yemen, who went to Medina to see the prophet Muhammad (SAW); however, he had to go back to his sick mother without meeting the Prophet (SAW).

Thereafter, the Prophet Muhammad (SAW) asked Hazrat Omar (R.A) and Hazrat Ali (R.A) to give His cloak to the Hazrat Owais (R.A). Since then, the descendants of Hazrat Owais Qarni are guarding the cloak.

Hazrat Owais Qarni traveled to northern Iraq where he fought alongside Hazrat Ali (R.A), the Prophet Muhammad (SAW) son-in-law, and the fourth pious caliph at the battle of Siffin against Umayyad caliph Muawiyya.

Besides, the descendants of Hazrat Owais Qarni (R.A) lived in Iraq until the eighth century. Nevertheless, due to adversities, they moved to Western Turkey,

“We have no documents, explaining why we came to Kusadasi. It appears that the family saw it as safe and decided to settle here. They stayed there until 1611,” Samir told the news portal. 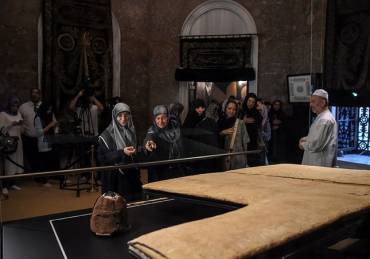 Sultan Abdulhamid I, the ruler of the Ottoman Empire in the 18th Century, built a small building for the cloak. The place became crowded later on.

“That place was also not big enough for the increasing number of visitors. This time Sultan Abdulmecid ordered to build a mosque and a circle of Hirka-i Sharif beside the mosque. The cloak has been here since 1851,” Samir said.

“We consider the circle of Hirka-i Sharif [in the Mosque] as a place that’s special. The place is where people feel close to him. It makes us happy to see that we are a vehicle of a spiritual connection between the Prophet and people,” he told the news broadcaster.

The descendants of Hazrat Owais Qarni (R.A) are doing a great job. They are wholeheartedly fulfilling their duty of protecting the cloak along with following other commandments of Prophet Muhammad (SAW).

What do you think of the story? Let us know in the comment section below!