Bollywood actress Priyanka Chopra is called out by a Pakistani woman Ayesha Malik who confronted her during the BeautyCon Summit in Los Angeles! Chopra serves as UNICEF’s Goodwill Ambassador and the woman passing by accused her of “encouraging nuclear war against Pakistan”

Chopra claims to be an ambassador for a helping organization while supporting India and its horrendous ways. Regarding the intervention of Indian fighter jets within Pakistan, she took to Twitter to say, “Jai Hind” that compelled her to receive constant criticism from Pakistan and most Muslim countries. The real problem is also the hypocritical nature of the actress for encouraging India as it invaded Pakistan’s territory. Yet, she mentions on multiple occasions that she doesn’t advocate for war.

The negative behavior towards Pakistan has been called out by Malik who, during the BeautyCon event, questioned Priyanka Chopra. She started, “It was kind of hard hearing you talk about humanity, because as your neighbor, a Pakistani, I know you are a bit of a hypocrite, because you tweeted on February 26, ‘Jai Hind, (hashtag) Indian Armed Forces” to then continue on, “You are a UNICEF (Goodwill) Ambassador for peace and you are encouraging nuclear war against Pakistan, there is no winner in this,” 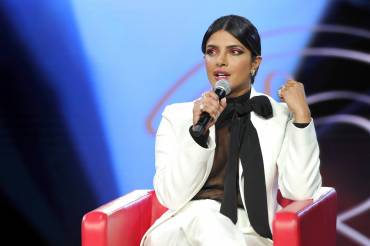 Any sane individual would take Malik’s side in this case because Chopra did depict to be insanely biased towards Pakistan. Not to mention, she serves as an ambassador and still believes ‘patriotism’ is a concept that can be brought up when people are suffering in Kashmir. Even though her beliefs themselves are simply offensive, her attitude towards the girl seems to be the worst part of it all. Chopra said, “I’m sorry if I hurt sentiments to people who do love me and have loved me, but I think that all of us have a sort of middle ground that we all have to walk, just like you probably do as well,” there is definitely never middle ground within war especially when people have to deal with living hell almost every day. This just ultimately demonstrates her privilege after possessing a huge western platform.

Priyanka Chopra tweeted during a time when we were this 👌🏽 close to sending nukes to one another. Instead of advocating for peace she tweeted in support of the Indian army pic.twitter.com/LhbMkOW59v

She then proceeded to say, “The way you came at me right now? Girl, don’t yell” the girl’s mic had already been taken away so her voice couldn’t reach Chopra anymore. However, Chopra did look surprised over the interaction especially after being called out for her unforgivable behavior. Also, she started to point fingers towards Malik instead of addressing the real question. In the end, she topped it all off with, “We’re all here for love. Don’t yell. Don’t embarrass yourself. But we all walk that middle ground, but thank you for your enthusiasm and your question and your voice.”

It appears that a lot of her international fans are also disappointed in her attitude. Many are starting to boycott her by mentioning that she is ‘canceled’. Obviously, Pakistanis are not extending any sort of justification or support for the actress as well.

What do you think of the situation? Share your thoughts.