CAIE announced that May-June 2020 exams will not be taken and students were given two choices, either take expected grades based on previous results or withdraw themselves from the May-June session. They can appear for exams in October-November 2020.

However, despite their claims, these options are only given to students associated with any institutions. But, the private candidates who didn’t register themselves through any leading education institutions are now forced to withdraw themselves from the session.

Where each successive statement issued by the British Council has kept students waiting for an adequate policy for them. The final announcement has left private candidates with no option but to compromise an entire academic year.

Private candidates who make almost 40% of Pakistan’s entire enrollment had long been holding out hope for a comprehensive plan to be accommodated in the new exam-less evidence-based grading system. However much to their dismay, they were left high and dry in the final notification. It has been revealed that there are no plans for them but to appear in the November 2020 exam series.

Previously, British Council claimed that they will treat every student equally. But, it looks like in order to accommodate students from prestigious Pakistani institutions, they neglected those independent students. 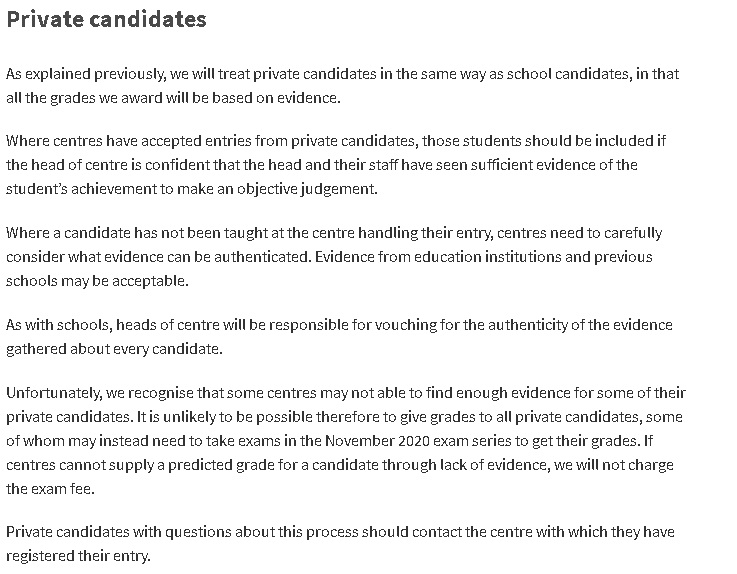 “One whole year would seem to be wasted for the private candidates including all their money, time, and efforts. This biased behavior is showing that private schools are really a mafia in Pakistan. This act of British Council Pakistan is discriminating and unfair towards many. Thousands of private students are now in turmoil,” a Private candidate told Parhlo.

“There is no time left and we have no option but to waste and year and take the November examinations,” he added.

A few days back, it has been reported that how leading education institutions like Beacon House and The City School is taking up the issue.

However, with the rapidly changing scenario, the schools and government policies are also changing. It’s yet to be seen how our education system will cope up with the crisis.

This Is Why We Must Avoid Restaurant Deliveries Amid Lockdown
What Happens If You Die In The Month Of Ramadan?
To Top