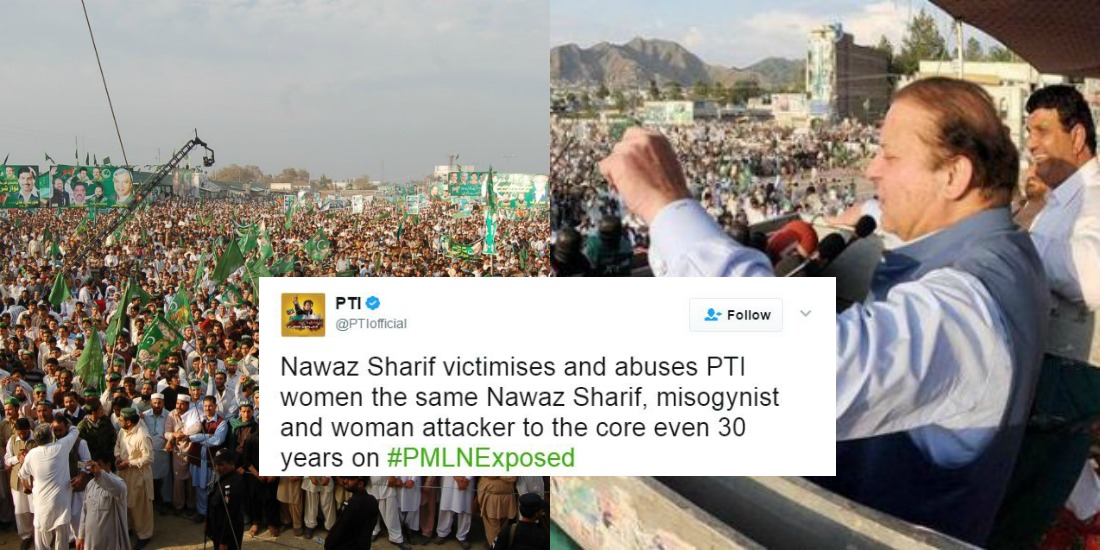 When it comes to politics in Pakistan, there can hardly be a month where an opposition party or a ruling party does not hold a public gathering. Especially since the decision for the Panama Leaks case was announced, a new wave of political gathering and game has started countrywide that has led us to question how much more can the ruling party endure. Apparently, if someone says “not much” then they may not be wrong after all. The ruling party has seemingly started to lose its cool over the gatherings to the point where even the Nawaz Sharif has spoken some harsh words.

Nawaz Sharif victimises and abuses PTI women the same Nawaz Sharif, misogynist and woman attacker to the core even 30 years on #PMLNExposed pic.twitter.com/bNbIhJo5uC

In a political rally organized by PML-N on April 29, 2017, Nawaz Sharif had some bitter words to say to the leader of PTI, Imran Khan. Replies and nasty remarks are often hurled by both the parties at their gathering however, little opinion is raised about the crowd from a personality as high as the leaders of both the parties. However, Prime Minister Nawaz Sharif did not hold back when it came to talking about the crowd. Nawaz Sharif openly questioned his supporters and the media “Ap ne kal ka jalsa dekha behnein wahan kya kar rahi thi?” (Did you see what women were doing in the yesterday’s gathering?).

Apparently, attending a political rally to show support to a leader is considered wrong if it is done by women in Pakistan. Maybe that is what the Prime Minister meant to portray. We may be correct, we may be wrong, however, people did not take lightly of such remarks and went all out on social media. Here are just some of the posts that people published:

Here Is What Asad Umar Had To Say About This:

It Is Amazing To See How His Supporters Are Defending Him But, This Woman Ends The Conservation By Saying:

Target Imran Khan If You May, Why Attack The Public From Whom You Need Votes From?

Shame on Nawaz Sharif for slandering women.This is wt PMLN in its essence is. Javed Latif, etc, r just the icing on a thick misogynist cake.

After Two Judges Calling For His Disqualification And Troubles With Dawn Leaks, He May Even Regret These Remarks

Embarrassment after embarrassment for Nawaz Sharif,pretty sure most federal ministers want their misery to end &elections 2018 to come soon.

They Pretty Much Summed Up Everything!

Nawaz Sharif showing his true colours! Will go to any extent, even disrespect Pakistani women who question him!#MyPrimeMinisterIsCorrupt pic.twitter.com/0bQToHWGVd

No Sane Politician Would Openly Give Out Such Statements!

Strongly condemn the statement of Nawaz Sharif against daughters of our Nation. This is the level of PM Of Pakistan? Shameful!#GoNawazGo

Nawaz Sharif may not have felt what he said in that gathering. Anything that raises a party’s slogans from among the crowd is considered positive in the sub-continental style of politics. However, the people of Pakistan, especially those with dignity and honor and even a sense of logic would surely feel the needlessness of the remarks by the leader of Pakistan.

Meet The Surgeon Who Successfully Conducted Pakistan’s First Liver Transplant!
Here Is Everything You Need To Know About The Birth Anniversary Of Imam Hussain
To Top