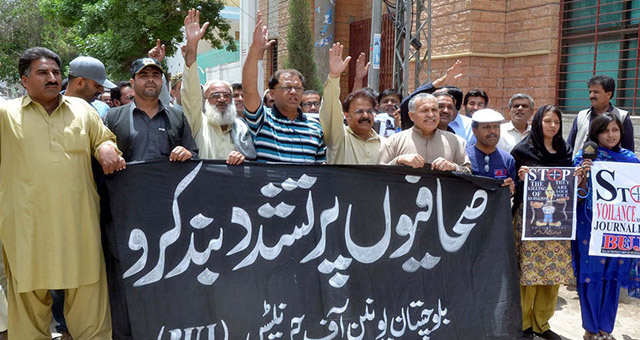 QUETTA: To mark the World Press Freedom Day, journalists marched on the roads of Quetta to mourn the killings of colleagues and voice for freedom of speech and expression on Saturday.

The members of Balochistan Union of Journalists (BUJ) staged a protest rally outside the Quetta Press Club to mark the International Press Freedom Day. The journalists were carrying placards and banners inscribed with slogans demanding the arrest of journalistsâ€™ killers and compensation to the affected families.

â€œWe want the commission to probe the murder of our colleagues,â€ Shehzada Zulfiqar, a senior official of the BUJ told Dawn.com.

More than 30 journalists have been killed in Quetta and other troubled parts of Balochistan during last more than seven years.

â€œThe murderers are still at large, despite our repeated appeals,â€ Zulfiqar said.

The protesters chanted full-throated slogans for freedom of expression and speech and demanded an end to impunity in the province, plagued by violent attacks by militants.

The rally turned into a protest demonstration outside Quetta Press Club where senior journalists addressed the protesting media men. They lashed out at law enforcers for their inability to bring the perpetrators of journalistsâ€™ killings to book.

â€œWe stand for freedom of expression, despite all odds,â€ Khaliq Baloch, the Secretary General of QPC said.

Apart from working journalists, a large number of hawkers also participated in the rally to mark the International Press Freedom Day. The journalists demanded protection and expressed concerned voice over increasing polarisation in the media.

â€œWe will not bow down our heads before any pressure,â€ Khudai Noor Nasar, a young journalist who works for Radio Mashaal told Dawn.com.

Nasar urged upon the journalists to bury their hatchet and struggle for common cause of freedom of expression and speech.

Balochistan is considered to be the most dangerous province in Pakistan for journalists. With New York size population of 8 million people, more than 30 journalists have lost their lives in their struggle to inform, educate the people about the unfolding stories in Pakistan’s geographically largest province.