Pakistan’s legislative history regarding women’s rights has been sketchy, at best.

The recent years of pushing through for women’s basic rights resulted in the passing of three important rights;  Prevention of Anti-Women Practices Bill 2011, Acid Control and Acid Crimes Prevention Bill 2011, and the Women in Distress and Detention Fund (Amendment) Bill 2011. However, there was still ground to cover.

When the Women Protection against Violence Bill 2016 was passed, another small wave of collective triumph was felt for all the women of Pakistan. The continued efforts of  parliamentarians, women’s rights groups and activists to reform the existing laws for women, were paying off. The bill has now made it legal, a necessity to prosecute those who have inflicted abuse and violence on women; domestic, spousal or otherwise.

However, there are some who believe this initiative was an unnecessary step to take.

These astute minds, fully aware of every possible benefit and disadvantage of their legislative rights have made up their minds that the Women Protection Against Violence Bill 2016 is not, in fact, needed.

Taking to Twitter to voice their extremely important opinions, the ingeniously dubbed* , “ghairatmand and secure mard of Pakistan“, shared their inspired tweets and making it so very, very clear why the bill is not required: 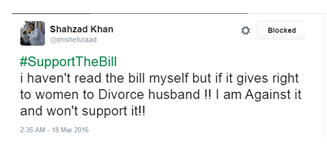 Because a good justice system is the downfall of any country

Because why on earth would anyone want women to have an escape from spousal abuse in a society/for communities that so clearly has no problems with violence? 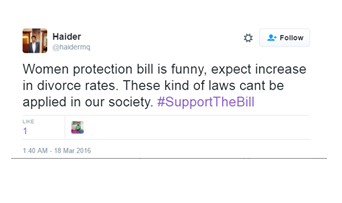 These brave pioneers do not stand alone. Thousands bear the same mindset, believing the bill is ‘un-islamic’ and incompatible with familial values in our society.

These beliefs need to stop.

Unity in the name of misinterpreted religion and ignorance is not unity at all. It is an infection, one that spreads quickly through uneducated and public claims.

While commenting on the ‘ghairat and secure’ people’s behaviour is not counter productive – it’s not very productive either.

The basis of these claims stem from a clear lack of education on; the distinction between family values and domestic violence, the concept of divorce, what the rights of women in Islam are and the different faces of violence in Pakistani society.

To recognize the Women Protection against Violence Bill as it is – progress – it is important to emphasize the background from which it rose.

So read up on the bill. Reread it. Copy paste and make flyers of its measures. Hold formal and informal discussions on the importance of the bill and invite people to it. Make sure the next person who makes a passing comment at how the bill isn’t ‘necessary’ leaves your midst an informed individual.

For more information, read the Women Protection Against Violence Bill 2016 and the Women’s Rights in Islam by Dr. Farida Khanam, complete with citations.

*Ingeniously dubbed by I Need Feminism Campaign at LUMS.

Also See: Working Women: Let’s Put Them Back in their Place

Pakistan vs India: 27 Hilarious And Witty Responses From Across The Borders
5 Exams Every Pakistani Student Needs To Attempt At Least Once
To Top