People Are Making Fun of This Picture from 'Parwaz Hai Junoon' But There's a Twist To The Story!

Over the last 5 years or so, Pakistan’s film industry has started coming back to life. The revival, however, seems to be based around films of war and patriotism, which urges the general population to go and buy tickets for these movies in cinemas.

One such film on the cards for Lollywood is ‘Parwaz Hai Junoon’. The movie which stars a lot of celebrities including hot-shot Hamza Ali Abbasi and Hania Amir, is hugely being anticipated by Lollywood’s faithful.

However, the pictures that were released for the publicity of the movie have not gone too well with the public, especially one. There’s a picture that showcases Hania Amir, Hamza Abbasi and Ahad Mirza, which is being trolled massively on social media. Can you spot what’s wrong in this picture? 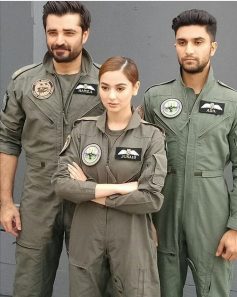 Well, if you haven’t been successful in pointing it out. Let us tell you. See Hamza Ali Abbasi’s name-tag on the uniform, then look at Ahad’s.. and at the end notice what’s written on Hania Amir’s uniform. Yup, they gave her a uniform that says Junaid!

People were never going to let this error go and they made themselves heard. Some said that this is most beautiful ‘Junaid’ they’ve ever seen, while others thought that this was the only uniform in Hania’s size which could be borrowed.

Ladis and gentlemen introducing you a bravo lady pilot junaid what the…..#parwazhaijunoon pic.twitter.com/yRNTwLXdWu

May be Junaid is the only smallest in force whose uniform could be borrowed…??? WTH#parwazhaijunoon #HamzaAliAbbasi pic.twitter.com/QbxwCdVoQ8

In all honesty, one aspect and reason of Hania wearing a Junaid name could be her surname in the movie. What if her name, for example, in the movie is Hania Junaid, and instead of writing Hania, she preferred to write her father’s name? Many men in the military already do that. 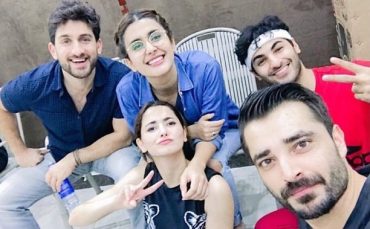 Apart from the trolling, people really are excited for the movie’s release. Here’s what they say:

The amount of love you can imagine when everyone was desperately looking for @ahadrazamir in the 1st teaser .our boy have already came a long way?

This Guy Tells How A Girl He Knew Was Harassed In School Because Of Her Body And It’s Remorseful!
A LUMS Student Reveals How She Got Robbed by a Local Cab Driver and the Details Are Horrifying!
To Top