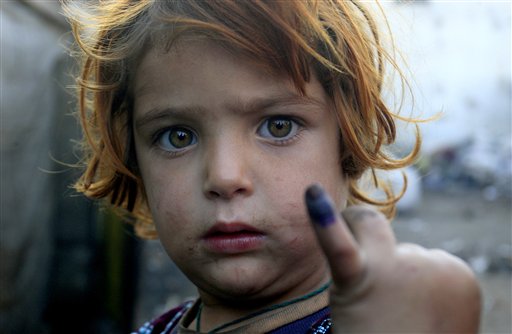 Numerous girls, especially in Khyber Pakhtoonkhwa have been deprived of their right to realize the dreams. Their dream is to get higher education, and achieve something in life. Unfortunately, they haven’t been able to do it the reason being their disability. It’s the polio that has still kept children from making the most of their lives.

Khyber Pakhtoonkhwa government has introduced Free education for the disabled but the effort is not brining any good results.

The children are diagnosed with polio at very young age, usually when they are a year or two years old. Then, after realizing about the disease they get the polio vaccination which doesn’t work as it becomes too late. Numerous cases are published in newspapers informing about orphans suffering from polio turning their lives worst.

Children aspiring for education can not pursue it because of their disability. In worst cases, they break their hands or legs when putting more effort than they are capable of. The picture becomes gloomier when we get to know that there are no adequate services for polio-stricken children in any hospital in Khyber Pakhtoonkhwa. 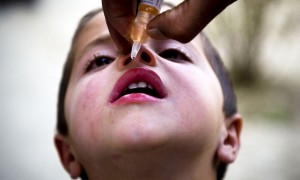 The parents of polio-affected children have to take them to Lahore or Islamabad for check-up and get them orthotic hoes so they could walk.  There are few hospitals offering some services for polio-stricken children but the conditions are far from good.   “

Disability doesn’t imply the end of world for the disabled. But, it adds up to their despair when medical facilities and educational prospects are not available for them.

According to Helping Hands for Relief and Development (HHRD), there are more than five million people in Pakistan living with some kind of disability. And, the number of polio victims is increasing day by day. The efforts put in by local people to control the disease don’t do much good because they are targeted by Taliban and other extremist elements in Khyber Pakhtoonkhwa. Thus, the polio workers have been de motivated and left in deep fear to work for conduct polio-campaigns. After all who would risk their lives for something the authorities don’t care about? 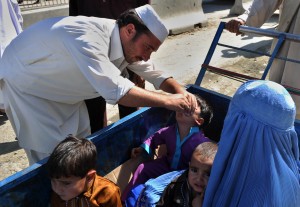 The sorrow and hopelessness of children suffering from polio is conspicuous in Khyber Pakhtoonkhwa. These children grow up living the lives with misery and melancholy. Nobody else but they know the importance of limbs in leading a happy life and they wish that people knew the importance of two drops of polio. These two drops can save child’s life. Many families and parents remain ignorant about polio drops as take them as a way to affect person’s ability to produce. Due to lack of awareness and deliberate ignorance, parents lie to polio team coming at their doors steps so that their children are saved from polio drops. These are worst rumors. Polio drops are harmless; rather they save you’re a child from being disabling. One wonders why a government doesn’t conduct marketing campaigns in which they show the person having polio drops in childhood and having his own children now. 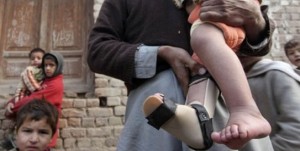 It’s an irony that a disabled girl, no matter how much educated and able, fails to make her both end meet because employers perceive them as less potentially sound. I personally know a woman named Shazia, whom I met at an NGO where I was contributing to philanthropic work. She was very well educated. She told me about the problems she goes through in daily lives. She works as school teacher at a local school where she earns Rs. 4000 which is not sufficient for her to earn living for her and her two aged parents. She earns less because her employers are reluctant to pay her more making an excuse of her disability.

This is none less than exploitation of poor people and serious violation of human rights. Had her parents been exposed to polio-campaign she wouldn’t be disabled in first place. Had authorities cared about rights of disabled people, she wouldn’t rely on loans to make both ends meet. 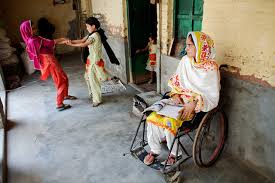 There are countless women like Shazia living a miserable life in Pakistan. The current KPK government has taken commendable steps to eradicate the disabling disease of polio. But, they need to address the threats of extremist in bold manner as well. Other provincial governments should follow the suit to ensure the bright future of our children and give them their innate right to get education and a good living.

Education is given priority over programs like polio eradication schemes by provincial governments. Firstly, there shouldn’t be any trade off between the two. Secondly, polio eradication schemes and health facilities are more important than any other social programs because they ensure the health of populace. This month alone, 220 cases of polio were observed in Pakistan.

According to the World Health Organization (WHO), Pakistan is at a “tipping point” as the remaining endemic countries in the world, Afghanistan and Nigeria, have seen a significant decline in the number of cases this year.  The number of cases increases by the hour.

Yesterday, on World Polio Day, Pakistan made headlines all over the world where Polio not only prevails but is arising with astonishing rate. Pakistan broke its 14 year old record when it registered more than 200 cases.

One could raise questions on Pakistan’s ability to address polio issues and making good the lives of people like Shazia. According to the country’s Expanded Programme on Immunisation (EPI), more than half a million children have not been polio vaccinated since past few years. They all remain more vulnerable to Polio as ever. The picture is not all gloomy; there is still a ray of hope for children deprived of polio drops and vaccination. According to WHO Emergency Coordinator for Polio Eradication, Elias Durry, the county has the capacity work toward a polio-free Pakistan by the end of 2015. He said,

“The upcoming six to nine months are critical.”

The government has ability to address the issue by providing adequate facilities of polio drops and ensuring the safety of health workers, and introducing the narrative against extremists’ propaganda against polio drops. The awareness of populace hold utmost importance.  So, the need of hour is to educate polio-infected families to come forward and take initiatives themselves. The penetration of immunization program should be ensured and most importantly take care of women like Shazia who stand open to exploitation as they get judged by their ability to move, not by ability to work.

South Africa Goalkeeper Shot Dead to Protect his Girlfriend
Cyclone Nilofar: “The devastation can be massive and lives can shatter” – Meteorological Dept.
To Top