This Police Officer’s Niece Stopping Him From Going To Work Before His Shahadat Is Heartbreaking!

Life is a series of unfortunate events and in an average duration of life, a person gets, it’s not necessary that he receives everything he wishes for. While the world conditions are getting worse in every aspect, some kind human souls are still making this temporary place a bit bright. With the escalating situations at the border and within the country as well, the increasing number of illegal and immoral activities being pulled off is showing the failed state of the law enforcing agencies.

This video of a police officer from Karachi before embracing Shahadat is going viral on social media!

While we often hear stories related to the Pakistani police which show them in the bad light, there are many who devotedly perform their duties in order to maintain peace in the country. Last month, another such case poured in where a Lahore police officer was seen disrespecting an elderly woman which became another reason for the civilians to not trust the police. Amidst such hate, recently, a video of the niece of a young police officer Zeeshan from Karachi stopping him from going on his duty before embracing Shahadat is extremely heart-rending.

Here’s the lovely video of the police officer playing with her adorable niece!

The adorable clip showing the love bond between the Zeeshan and his niece is sheerly cute but the ugly part is that the little girl won’t be able to meet her uncle ever. As per the reports, last week on 5th September 2019, Zeeshan’s family got the news of his unexpected demise which left them in extreme shock. Upon interrogating more, it came out that the young police officer got engaged in a crossfire with the street dacoits in the Metropole’s Nazimabad area during which he got hit by a bullet and died then and there.

The adorable clip of Zeeshan and his niece is making people all teary!

In the morning while leaving for work, Zeeshan had a captivating exchange of words with his adorable little niece which was, thankfully, recorded by one of the family members. Later, after his Shahadat, the cute video started circulating on social media captioned with the incident and Pakistanis are extremely heartbroken. Till now, the clip has been shared by various social media accounts and has even been covered by some news publishing companies. Prayers and well-wishes for the family of the deceased are still pouring in on the internet. 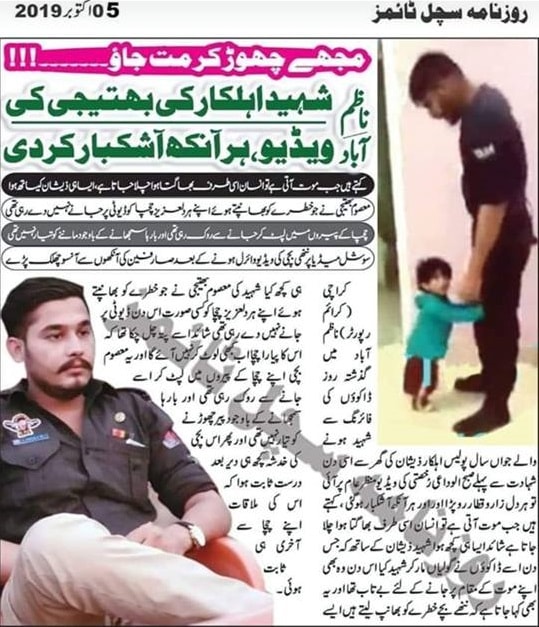 Not just one positive story, there have been many other events where some policeman has risked his own life to save the civilians. Taking the increasing number of minor rape cases in the Punjab province, recently, after collecting proper evidence, Punjab police arrested the man responsible for such heinous crimes and is now serving behind bars. In this cruel world, where if we can see the wrong in someone then we should be able to see the positive side too instead of creating a false image in our minds.

Shahzad And Akmal Gave A Career Ending Performance And Pakistanis Are Grateful To Misbah
Sania’s Sister Anam Is Marrying Azharuddin’s Son And Mirzas Are Really Excited About It!
To Top